But tomorrow, Madame, I will be sober

We despaired in a recent post that carbines of the AR15 family can get a new lease on service with Uncle Sugar if only the cartridge were changed to something that delivers lethality at greater range. One new cartridge is under serious consideration by our esteemed Uncle, another has been proposed, both fitting neatly within the physical constraints of the existing carbine and magazine, needing little more than a new barrel, bolt, and magazine follower to lose the "poodle shooter" pejorative.

Either the 6.5mm Grendel (the preferred solution here at WUTT!) or the 6.8mm Remington SPC (the likely successor) would be a major step forward.

But as the borrowed Churchill quip implies, we can change the caliber but the carbine will still be an AR15. It taps propellant gas from the barrel, and ducts it half the length of the weapon back to a chamber inside the bolt carrier to operate the action. This reduces the weight and parts count of the weapon, but dumps propellant gas inside the action where it can foul it and cause malfunctions.

The AR15 also uses a cocking handle that rides inside the top of the upper receiver. It is difficult to use this cocking handle with the non-firing hand while the firing hand keeps a consistent grip. The movement of this control also interferes with placement of a cheekrest. Aftermarket upper receivers are available with cocking handles on the left side of the receiver, like the FAL's, instead of on top at the rear.

Rather than replace the AR15 family carbines already in Uncle's arsenal, we propose instead to refit them, both to change the cartridge to a non-poodle shooter, and to remove these two design details. Mr and Mrs Taxpayer may thank WUTT! for the tens of millions of dollars saved.

The existing upper receiver can be retained, if has the rails for the removable carry handle.

Everything from the upper receiver forward goes away. The new barrel bears a block, in place of the front sight, that offers short Picatinny rails at 12, 3, 6, and 9 o'clock around the barrel's circumference. A gas piston inside the block taps the propellant gas and points it rearward. The rails offer ample space to mount sights, lights, designators, even a recoil- or muzzle-operated digital camera.

Instead of the loooooong gas tube sprouting from the gas block, an operating rod with a cylinder in its front end mates to the piston at the front, and passes into the upper receiver at the rear. The rear fits inside the bolt carrier key. Heckler and Koch have already designed this part and offer it as a retrofit for M4 carbines.

A rear block surrounds the barrel immediately in front of the gland nut that tightens the barrel to the upper receiver. It has a short Picatinny rail at 12 o'clock, and a channel under that to take the operating rod and guide it, and retain the upper handguard. At 6 o'clock, it has hardpoints that lock bipod legs in place.

The lower handguard looks just like a lower handguard, but it is split into quarters, right and left. These are extensible legs of a bipod. The legs hinge where they attach to the front sight block.

A vertical foregrip, a GL, or a shotgun can be installed in place of the lower handguard, of course.

Important: the Picatinny rails do not surround the barrel along most of its length like on the current M4A1. The rails, and the handguards fastened to them, trap too much heat on the barrel. In prolonged action, the barrel gets hot enough to ignite a cartridge as soon as it's chambered, known as a cook-off.

The receiver-mounted cocking handle is removed, and a plastic plug installs in its place. Ears from the plug reach around to the rear of the sight rail on the upper receiver, to fasten tightly there. The plug provides a press-fit between upper and lower receivers when they are closed, and could be fashioned as a flip-up reserve rear sight, calibrated for the new caliber.

Airborne Combat Engineer shows a few photos and asks readers to name them.

The other photo is of a Spanish CETME Model 58, precursor to the HK G3. CETME parts kits are being imported and assembled on domestic receivers as semi-auto rule beaters. They're OK as long as they don't have the dummy muzzle brake welded on the muzzle. The welding hoses up the tempering and warps the barrel. And the original rear sight sucks.

What do we get if we have won? Addition to the blogroll?

Update on 1 April: We did not win. But we are Priority 3 on ACE's blogroll. We reciprocate.
Posted by Fûz at 21:01 No comments:

We heard today that cardiovascular exercise and music, combined, improve cognitive skills. If this is true, it's a genuine practical reason for Fûz to get a mini iPod.

We have little use for downloaded music, at least within the Denver metro area, because AM and FM serve our needs just fine, Fûz listens to talk much more than music, and we're too damn stingy to buy CDs that have only one or two good tracks on them (there are a few exceptions). So it's hard to justify a dedicated MP3 player unless a killer app can be found, say, something that can help Fûz learn a NATO- or CENTAF- interest foreign language.

Are language study programs available in MP3 or Ogg Vorbis format? Yes, they are. The apps might not be "there" yet, they're oriented towards desktop study or they're just MP3 files of spoken language. The respect that the iPod is getting these days suggests that it has the processing power to be much more than just a music player.

Developers, and geeks at the service academies, listen up: somebody with deep pockets is ready to buy this in volume. Never mind the phraselators that will do the translating for you, there is no substitute for an instructed human brain. In the end, economies of scale can make instructing the human brain cheaper. Make a gadget that you can attach to the soldiers so they drill on language while they PT, and you'll know that the training will take. Better still, the soldiers will be able to summon that skill during periods of stress and exertion (when it's needed) because that's when it was learned. If Uncle Sugar provides the application and support, the GIs will probably provide their own iPods---we are Early Adopters.

Mere playback of spoken language will not be enough. It would need interactivity, for example it asks a question in the language of study and the student thumbs through a menu of spoken answers and chooses the right one; the app tracks the right and wrong answers. When it docks, it uploads the exam results, and downloads new lessons. The exam results can be channeled back to a wetware language instructor, who can guide the student with whatever intensity the student can handle and will pay for.

In release 2, increase the processing power and add a microphone, so the student speaks the answer and the app/device can improve pronunciation, either through its own intelligence or piped back to the instructor. Randomly speed up, garble, shout, or heavily inflect the speech and see if the student can keep up. You get the idea.

Is this starting to sound like it needs a high-end Palm instead?

The Rocket eBook is a dead letter at this point, too damn heavy to take on a run, not enough capacity, no apps. Anybody desperate for one?
Posted by Fûz at 14:17 No comments:

Toad now tips the scales at 4 kilos even. 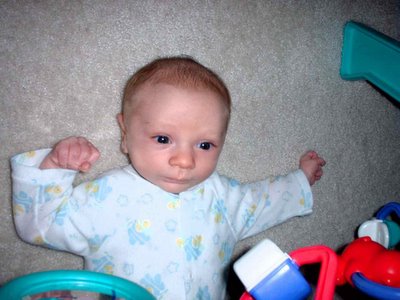 This is a bigger thing than it sounds. We've had our Gattaca moment with Toad---he has a little cleft in his soft palate. It wasn't discovered until about two hours after he was born, there was no outward sign of it at all. But it means he can't nurse, he can't generate the suction. Good lawd we tried, and after a few weeks, he was well below birth weight instead of gaining.

We now use a device called a Haberman bottle to feed him, and Barbaloot expresses milk every few hours to load into the Haberman. He's gone from 60 to 100 ml a feeding in about 3 weeks of diligence.

About Christmastime, if he keeps gaining weight, he will withstand the general anaesthesia to undergo surgery to join the muscles in the back of his throat, and mend the cleft.
Posted by Fûz at 18:14

Further on the low-drag pipedream

The 6.5mm Grendel AR15 uppers are available. A little pricey perhaps, but available. We at WUTT! prefer the metric convention to the SAE, BTW, but showed deference to the developers. Since it seems everyone else has taken up the metric name, so shall we.

Though we'd be pleased as peas if a plainjane fluted heavy barrel were offered. We have the punches and wrenches to fit it to our existing upper. Otherwise, we're just changing the caliber on something that will still be an AR15 tomorrow morning. The same charging handle in the wrong location, the same gas system. Maybe they could borrow HK's op-rod driven gas system for the M4? And work the charging handle into the upper handguard?