. . . for it has been months without number since I've plugged the Carnival of the Vanities. Hosted at Smallest Minority. Please visit.
Posted by Fûz at 19:09 No comments:

Another quote for the day

there is no evidence that plentiful networked information can replace killing power and inherent survivability, especially in close combat. Timely and useful information is critical, but it cannot substitute for firepower, mobility and armored protection.

Having the the FCC and Congress as foster-parents is at best like being a child-star and at worst like being raised by alcoholics. Either way, stunted growth is a likely outcome.

Tim Wu regarding the regulation of VoIP in its infancy. HT: BoingBoing

Just one more flavor of Kool-Aid to drink

We have in the past proposed many schemes that amount to tinkering with the income tax code. Guilty as charged---with half my tongue firmly in cheek and the other half counting on the building popular exasperation with the complexity and the social engineering aspects of the tax code, which
would eventually spill over into support of some other method of taxation.

From time to time I have doubted that the exasperation would build to the point that the taxed masses would seek redress or revolt, indeed that it was building at all. Such doubts are more pertinent in time of armed conflict.

We will still (flippantly at times) propose income-tax tinkering in these pages, if only to point out how divisive our current system can be, and how serious I am about throwing it aside.

FoxNews Channel just showed off the XM8 and a glimpse of the M307.

Is this the beginning of a press build for seeking funding?

"It's an uphill battle," Sarah Brady, one of the nation's leading gun-
control advocates, said in a telephone interview last week. "Our
streets are going to be filled with AK-47s and Uzis" unless Congress
extends the ban, she said.

So if I see a Bulgarian AK just laying there in the street on the 14th, I can just keep it?

Cool. I'll pass on the Uzi.

I was clearing out a 22-gallon Rubbermaid tub in my crawlspace last night, weeding out old documents for which I had no use, and stacking the ones with social security numbers and such for the shredder. I came upon a few folders full of material from my monkey-wrenching days, if you will, when the American Civil Liberties Union pissed me off.

I had just subscribed. The first newsletter they sent me cited all of the wonderful work they did to protect civil liberties, with a page dedicated to each of the Amendments of the Bill of Rights that they worked to protect. The Second and Third were absent. I wrote them asking why, and they replied with their policy as it stood at the time.

This was about the same time that the ACLU's president spoke to a gathering of Libertarians (it might have been a national LP convention, I don't recall) and someone from the audience asked why their policy on RKBA matters was so, uh, wrong. She offered to seek a reexamination of the policy; the audience reacted very favorably.

I kept writing, asking if the policy would be reexamined, and I invited a few of my friends, namely, GOA, CCRKBA, JPFO, and most of the Usenet, to write or call with their support of the notion.

This is no hoax, it's the genuine article. I have a few others like it. The "burdensome flow of communications" effectively shut their offices down for a few weeks until they could sort through it. It was not my goal to shut them down, rather to encourage them to at least reexamine the conventional wisdom and not fear the prospect of an unpopular stand. 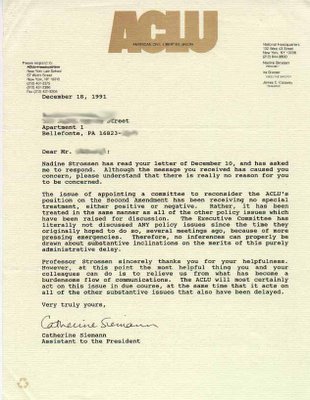 I was a younger man, more naive about how hypocrisy and cynicism can survive and even flourish in an organization dedicated to lofty goals (note well: not Ms Strossen I'm talking about here, but the organization she presided). Perhaps I've gained some wisdom and realism along with 20 pounds of body mass since then. And perhaps the ACLU has learned something---they and the Gun Lobby have worked together, on issues affecting conventionally-understood civil rights as well as RKBA, though gun rights definitely remain "not their bag."

But ACLU will have to contribute many thousands of lawyers' hours on some cases they wouldn't have touched in 1991 before I'll spend another dime on them. They know this clearly.

Oh by the way, did they ever change their national policy number 47? Apparently not.