Sergeant Stryker posts on our abridged free-speech rights under the UCMJ. Well done.
Posted by Fûz at 22:38 No comments:

Cadre once posited that the motion pictures Casablanca and Pearl Harbor represent exact opposites. If you want an explanation, you'll have to wait for Cadre to place them here as a comment; that's his content. However, I'll riff off of that line of thought:

A Congressman is the antithesis of a telephone company.

Ask anyone in the abstract: Are members of Congress crooks? They'll answer yes, they are all corrupt, they appropriate and spend too much money, they don't give enough money to those pet projects to which I owe my job or my college tuition. They're tampering with my Social Security, and shoving Bible statues into public places.

They're all crooks, except my Congressman. He or she renders very good service to his or her constituents ("me"). I generally support term limits, but I don't want those term limits to remove my Congressman from office.

Ask anyone in the abstract: Are telephone companies crooks? They'll answer no, except for my phone company. They charge too much for advanced calling features, they're trying to get into long-distance service while keeping other phone companies out of competition with them for the local market, the majority stockholder is a so-and-so with backroom ties to the legislature. They haven't built out enough phone lines to support the new construction in my neighborhood either. It takes them too long to send someone out to fix my phone, and I heard they just laid off some repair people. I'd rather do business with any other phone company than this one, just to have a choice. In fact, I get my cell phone from such-and-such and long distance from whats-its-name. They're great!
Posted by Fûz at 22:11 No comments:

Part I is here. Part II is here.

I rushed home with the new power supply fan, the existing power supply, and a vision . . . a dream of a quietly-operating G4, repaired for less than ten bucks. Barbaloot was going to an event at our church, so she had time to grab burgers for the offspring units and a sandwich for the two of us. I had to wait, and manage the mealtime for offspring units, before I could move the vision to reality.

Two butt splices grafted the original fan's wiring connector to the new fan. In ten minutes the power supply was reassembled, installed, and the rest of the G4 closed and cabled around it. Booted up.

Unprintable expletives were confined to the basement, while the offspring units watched a Kim Possible DVD upstairs.

I let it run and ignored the noise for the next two hours, either pluking around with other software on the noisy machine, or putting offspring units to bed. The machine's meltdown was imminent and inevitable. Barbaloot got home, ate her half of the sandwich, and asked how it went. I cupped my ear toward the basement. She stepped nearer the door and heard the whine.

"We'll just run with it, I guess. It's not a drive, it's not the power supply, it's not the side fan. I'm stumped." So she opened her Netscape and read her email while we pondered how to recover our stuff if the G4 goes over the edge.

Then I did the unprecedented, the bold---I followed the nihil desperandum outside-the-box follow-the-Force,-Luke hunch that has gotten me out of deep serious before. I started feeling the outside of the unit: sides, top, bottom, while Barbaloot worked. The vibration, in sync with the audible whine, was faint on the bottom and the top. Nonexistent on the front. Rear is too crowded with stuff for a vibration to get through. Sides . . . the side where the power supply and the cooling fan are mounted, nothing. The side where the mobo rests, it's there and strong.

So I turned the unit to the side, and opened the unit as it ran. I gently lowered the side to expose the motherboard. I groundstrapped my hand and started feeling around inside. Drives, nothing. CPU heatsink, faint. Motherboard proper, fair to middlin'. Are you sure there's no CPU fan? . . . Yep. No fan there. What other moving part is there inside this pig?


The component side of this card faces away from you when the unit is open and you look inside. I would never have seen the heatsink with a 38mm fan nested in it. I had to crane my neck around to see the fan. The aliasing of the fan blades, and the label on the hub of the fan, showed that it slowed down and sped up in step with the change in pitch of the grinding noise.

The unprintable expletives were again confined to the basement. "Do you use that mouth to kiss me?" Barbaloot asked.

No amount of blown air would clean it to the point that it would rotate freely under the tip of my finger. Plenty of dust was ejected from its heatsink-cage though. BreakFree quieted it down significantly but I can still hear the speed changes. So after work today, it's off to see DeeDee Who Could Be Cute again.

No Irishman can beat you for dogcatcher this time, Dad! You're a natural!

Let's get this over with right now, so it doesn't come up and bite me in the ass later.


I have behaved badly sometimes. I have done things that were not right which I thought then was playful but now I recognize that I have offended people. And to those people that I have offended, I want to say to them I am deeply sorry about that and I apologize because this is not what I'm trying to do.

A Cargill TV ad about the quality of baby food ends with a slo-mo gray spoonful of said product splashing on Mom's smiling face. Some really twisted mind could take that video clip and run with it. Not me, though.
Posted by Fûz at 21:45 No comments:

Part I is here. Part III is here.

So, throwing caution to the wind and sipping Jose Cuervo to stoke my courage, I entered the existing power supply to have a look at the fan. Piece of cake, the case was screwed shut instead of riveted shut, and the fan came out with two Phillips screws. Nothing seemed the matter with it, but who can tell without dropping 12 volts across it and listening to it spin?

Next time I perform surgery on a noisy computer, I'll go to the trouble of checking the suspected component more rigorously. A stack of C cells to spin a fan isn't too much to ask if I'm troubleshooting a part that could cost as much as a whole new computer. But I'm getting ahead of myself.

So on my way home from work yesterday (more on that later) I stopped a computer store where they have real geek girls. At the service desk, with the supply in one hand, and the fan from the supply in the other. As soon as I uttered "Power Mac" the guy behind the counter started, as if I had carried in a four-day-old sheep carcass with me. "Why don't you check at the Mac department?"

Riiiiiiggght. A fat lot of good that has done me. I wandered slowly along the power supply aisle. Fans there were, identical to the power supply fan, 8 bucks and up, just the wrong connector on the harness. That can be fixed. DeeDee, A Real Geek Girl Who Could Be Cute asked if I needed help, and I explained the situation. She looked at the power supply's harness and said it looked like an ATX type, but admitted that Macs are different and trying an off-the-shelf ATX supply would be risky. Reader DavidMSC agrees.

The fellow in the Mac department looked at my sheep carcass and said, "We don't handle parts here, you need to see the Service department."

"They suggested I see you first."

An unprintable expression flitted across his face, then he recovered his professional demeanor. "I understand, sir, please check with Service." I ogled a few G5s then headed back.

DeeDee Who Could Be Cute, in a Kathy Najimy kind of way, asked me about my progress while I was pricing open-box specials. I recounted my progress so far, and she offered to work the issue with the Service people for me. Not yet.
"Working the issue with" someone is a particularly Ambitious kind of thing to say. Geeks don't really say that unless they're translating themselves the better to be understood by Ambitious people. So DeeDee Who Could Be Cute may be that dreaded hybrid of Geek and Ambitious, the Sales Engineer. More on the comparison between Geek and Ambitious below.

Second trip to the Service counter. Different guy. "Why don't you check with the Mac department?"

"Negative. Already did that. They sent me back here," I replied with even voice, clenched teeth, and curled lips. He retreated, asked for the supply and walked it back to where the controlled-access geeks are kept. Moments later he came back with the same cautions. "Looks like an ATX, but Macs are different. I can't advise you to do it." Fair enough.

I stuck to the present game plan of buying a replacement fan. DeeDee Who Could Be Cute checked me out and I was on my way with a seven-dollar fan.

Ten seconds on high, or until just before the marshmallow explodes 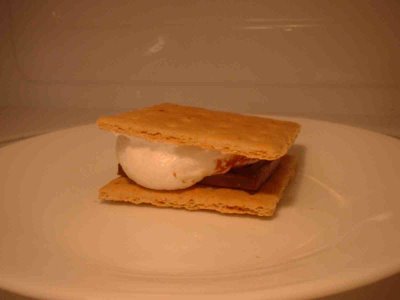 Daughter-units carefully built the case this past weekend that I should clean out the cubbyhole beneath the basement steps, so they could enjoy a Harry-Potter-style playspace. I accepted this value proposition, cleared and restacked all of the junk in the space, and sorted through many papers that had accumulated since the move from Leatherstocking Country to the Front Range. The dust raised in clearing this space out unfortunately settled inside our always-on PowerMac G4.

It now sounds like an elevator, grinding up and down with varying pitch and volume but overall sounding not well. After some browsing and some redneck troubleshooting, I have cleared the cooling fan and the hard drives, and figure it's the fan in the power supply. I'll heed the warnings this time and not enter the supply, unless I get very desperate.

Fortunately also, Apple's support pages show how to disassemble this model and replace the power supply, if I can come up with one. So it's off to some computer boneyard or other to find one, or a close-enough form/fit/function replacement.

This topic continues here.
Posted by Fûz at 19:40 No comments: