I touched up the serial numbers on my KTO lower for the Grendel. Acetone removed the adhesive holding the template on the receiver. 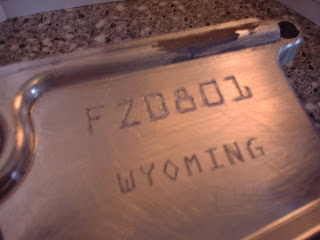 Then a short turn in the sandblaster, and a brief immersion in dilute sodium hydroxide to open up the aluminum's pores.

Then I rigged up an anodizing bath as described by tomh. Sulfuric acid was available at the auto parts store, and much cheaper than I expected. The voltage was provided by the pickup truck. Aluminum rod threaded into the pistol grip screw hole suspended the lower in the bath and away from the cathode. A piece of roll flashing served as cathode. 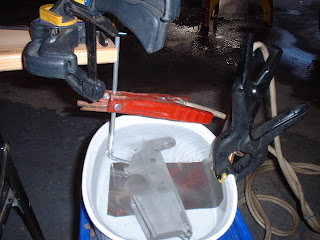 Now the part is being boiled in distilled water to close the pores up and finish hardening the anodized layer.

Tomorrow maybe the teflon-moly treatment, and then I can assemble the lower half of the Grendel on it. All the remaining parts are here and frankly they're kinda pissed I haven't put them all together yet.
Posted by Fûz at 18:33 No comments:

Still waiting for a notebook killer that merges a real computer with PDA. Ain't there yet but with the rise of sub-$200 netbooks, we're getting closer.

As some phones have gone touchscreen, other phones are adding unusable miniature QWERTY or pseudoQWERTY keyboards. I can't read the fine print on the keys.

I dislike them both, mostly because they both feature QWERTY keyboards, with or without the keys as moving parts. I can outrace either with Graffiti on a Palm, as long as I'm racing only myself.

So let's see, ummmmm, PalmOne roll out a computer-heavy smartphone with a screen that reads Graffiti. No flip-open with screen above and keyboard below: just screen.

Let Wacom help with the screen, stylus, and enhancements to the handwriting interface, say with ctrl, alt, right click, and other keys wrapped around the edges of the plate and accessible by the holding hand. The dominant hand is free to wield a stylus that supports click and delete functions like those of Wacom tablets. Keep fingerprints and cosmetics off the screen, please.

Rework a light but serious OS---a Linux flavor maybe---to accept Graffiti input from a stylus, and still sense a QWERTY keyboard if and when attached. Let OpenOffice or Sun port their office productivity suite aboard, with ducts for Graffiti input.

Package a phone module that can register on the majority of the cellular networks. Or ship multiple cellular flavors.

Forget the mic and speaker, just remote them to a Bluetooth headset, that's what everyone will be using anyway. I've resisted a smartphone this long in part because I need to read something off a PDA while talking on the phone.

Pack a webcam aboard, and Skype, and wifi, so you can work away from the cellular network when alternatives are available.
Posted by Fûz at 20:45 No comments: