After work today, I stopped at the Commissary to pick up, at Barbaloot's direction, our Thanksgiving turkey. Plus cookies for the girls' lunches, 'Murcan cheese and broccoli, large eggs, and so forth. It's easier for me to get home half an hour later than usual bearing groceries than for Barbaloot to drag Boy with her to the King Sooper's, and still pick up the girls from school on time.

The turkey was sixty-eight cents a pound. The cashiers were polite, cordial even. The grocery bagger was careful and made eye contact with me. After I tipped him and walked my own groceries out to the car, the tang of winter air on my nose punctuated a paragraph God had been quietly composing for me all day.

You, Fûz, have the Life of Riley. You are so very lucky.


And I am. I'm jobless, strictly speaking, and in a way that Official Jobless Figures do not capture and probably wouldn't understand. On 28 March 04, I'll be unemployed again and I have no idea what I'll be doing. But here and now, I enjoy what I'm doing and it doesn't drive me to Zantac, I put my kids to bed every night, another kid is on the way, the mortgage is being paid, I can get these thoughts out of my head and record them here without fear of retribution.

I'm grateful. That gratitude must go first to the taxpayers of the United States of America. I recall somewhere the idea proposed by a libertarian gadfly, that anyone receiving a subsidy, service, or other payment from the government should be asked, not required but merely asked, to sign a statement saying he or she was grateful for the benefit he or she received from the nameless hundreds of thousands of people who actually paid the taxes to make it possible.

Since the FedGov is in no particular hurry to start asking for such statements they won't even prepare blank forms to take them, so I hacked one together by myself. Technically, I receive the privileges of Tricare, the Commissary, and Class Six all in consideration for military service rendered, but since I feel lucky and grateful today, I'll express the gratitude anyway.

If you are a recipient of a similar Government-provided charity, feel free to copy/paste this certificate and replace my name with your own, or work up a competing design. Meanwhile Barbaloot and I consider with whom we will share our fortune, and our turkey, this Thanksgiving Day.
Posted by Fûz at 21:30

My good friend Sandy is devoted to a unique charity. It depends on money, as they all do, but depends much more on pure word of mouth.

Talk to your spouse and to your friends about child organ donation. Think about it now, before the prospect of losing a child is even on the horizon.
Posted by Fûz at 23:26 No comments:

A glum week to be sure

if my antelope is the only bright spot in it. Send Alphecca some cheer, see another pic of me and the antelope, and read Jeff's weekly Gun Bias review. Please donate to his nitrocellulose meditation fund too. Turn that frown upside down, Jeff!
Posted by Fûz at 22:59 No comments:

Never watch either one being made

Laws and sausages, that is. But Firstborn, Middlechild and I enjoyed the hell out of making them. The girls took turns cranking on the Porkert Number 5 grinder on Saturday afternoon. Here's the lot of them: 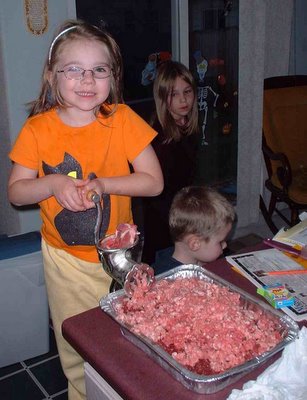 After dinner, they did not like the look of the hog casings filling with red goo, and opted to watch an old Maurice Sendak animation instead.

About twelve pounds of sausage resulted, including chorizo, Italian, and Weird Contrived Hickory-smoked with Cranberries.
Posted by Fûz at 22:31

Her column leads me to one of those posts that in the beginning seems to demand word counts of DenBeste proportions to set forth, but by the time I mull it over and struggle with it to commit it to words, it's over as quickly as marital sex.

Here goes: Bravery is difficult. It sets the mature and the confident and the innocent apart from the unsure. We pay bravery lip service in the abstract and the general, though every one of us has failed it at least once when the concrete and personal need points its gnarled finger to a single one of us. If bravery were easy, everyone would be brave, but it isn't so we aren't. But that is no reason not to insist upon bravery, even from the victim of a horrible crime. That bravery may be the only tool a victim of rape has to get justice for herself.

Anonymity, such as that little piece of it I kid myself that I have at this weblog, is the opposite of bravery. The anonymity of rape shield laws is meant to take away the sting of an embarrassment that the victim likely did not bring upon herself. But the dullness these laws leave in place of that sting does not benefit the victim in the long run, nor other victims struggling with the choice of staying silent versus coming forward, nor other women who know they may someday suffer the same crime.

Regrets for the misspelling.
Posted by Fûz at 21:55 No comments:

Middlechild enjoys The Picture of Morty and Ray.

Firstborn is working through The Tin Woodman of Oz (we used to live just down NY 13 from Chittenango, Frank Baum's birthplace). Then she finishes a Harry Potter and promises she'll try The Hobbit.

Boy, well, he enjoys anything read to him.

I'll start The Bride of Texas after I'm done gut-checking myself on Atkins induction. Czechs in the Civil War? Gotta be good.
Posted by Fûz at 21:36 No comments: