Most of the people in New Orleans were . . . able to help themselves, and help others, and to manage their burdens with dignity and compassion for one another. You don't see them on the news because they got out.

Feces Flinging Monkey. Emphasis in original.
Posted by Fûz at 09:28 No comments:

Remember Lexington and Concord, dear readers. That's Patriot's Day. And it's in April.

The anniversary of the attacks on the World Trade Center and Pentagon should bear no name. I don't even like the usage "Nine Eleven." Sirens should blow and all people should stop silently for one minute at the time of each aircraft impact. Nothing more.
Posted by Fûz at 23:10 No comments:

I am in the disaster profession. It has been a growth industry since the Gulf War, but I wasn't fully committed to a career in it until my third layoff in as many years in the telecom industry. A cordial invitation from the President of the United States in October 01 helped things along. I have not received a similar invitation to respond to Katrina, but let's not rule that out.

The Cabinet Man just today forwarded to me a link to a National Geographic article that luridly predicted the effects of a hurricane like Katrina.

Oddly enough, only a few weeks ago I was studying a software toolset designed originally for predicting just such effects. Other government users developed an interest in that tool early on, and adapted it to the modeling of other phenomena that could be considered disasters, hence my involvement with it.

Our last day of class, the instructor showed us the original purpose of that toolset, the modeling of hurricane damage. We navigated to the National Weather Service site, pointed the toolset to a Katrina forecast---at a time when Katrina was still in the Atlantic---and let the toolset generate its prediction. National Geographic all over again.

Displaced persons would number in the six figures, it said, if it never exceeded Category 4, and took a course that made landfall in Mobile Bay, crossed Atlanta into the Carolinas, and recharged itself over the Tidewater. It listed the numbers of refugees, injured, and dead, township by township along the notional path. The pages, rows, and columns of this prediction gruesomely resolved to single digits. It chose the most capacious roads and bridges to evacuate them (or depending on your view of it, which ones to close with force).

Of course there are qualifications. Garbage in, garbage out. We had the best forecasts available but no forecast can equal 20-20 hindsight. There were any number of things that the toolset did not do, and it used some wacky algorithms to do what it did. A computer can only answer exactly the question posed to it, within the limits of the data it is told to assemble for that question. Stupid questions cost the same as shrewd ones.

Still it predicted massive personal and economic disruption from Katrina, from one forecast days in advance for a less powerful storm than Katrina eventually became. As the storm progressed, the model could have been rerun, hourly if desired, the better to position resources, mitigate vulnerabilities, or direct evacuation. No doubt my peers around the US were doing so, some idly to practice with the toolset, others to satisfy the morbid fascination that runs deep in my profession.

Others were running it with a purpose, bags under their eyes, and anxious politicos breathing down their necks.

Which brings me to these very elected officials and their appointees. On the basis of the foregoing alone, one could have only contempt for the local elected officials responsible for New Orleans. A two-hour walkthrough of this disaster model would have shown them the risks and the vulnerabilities. A weekend retreat run by a competent consultant would have given them a roadmap of what plans to assemble and how to start coordinating them.

Hundreds of licenses of this toolset are in operation among DoD, DoE, and DoJ users, and hundreds more in agencies of state governments. The governor of every state, save a handful, has at least one installed license, and trained operators, available to him or her with a phone call. That excepted handful are tooling up.

It is not plausible that the government of a city the size and importance of New Orleans would not have access to a notional hurricane effects model of the kind I was shown how to create in less than an hour.

It is inexcusable---it is politically answerable, if you will---for an elected official, having been shown a model this detailed yet this early and this accessible, to fail to position the resources under his or her control to mitigate the storm's effects. What did Mayor Nagin know, and when did he know it? Did Governor Blanco ever place that phone call?

Among the geek and pundit community there will be list after list of lessons learned from Hurricane Katrina, and we will console each other as geeks and pundits do, by comparing them and hoping for the better. I add mine:

Perhaps this storm will remind people of what governments are for, what tasks we should give to a government versus to other institutions. A local government that cannot plan for a disaster, to preserve or recover public order after one, is a negligent government that deserves ouster. Do not allow public expense to build a convention center, nor a stadium, don't even build an airport with public funds, until your government can demonstrate that it can protect you and your property from reasonably anticipated disaster. Otherwise why institute that government in the first place? Who serves whom?

And for Chrissake, don't let that government interfere with your preparations for disaster, if it can't make its own.

Now I'm going back to blogging about praying mantises, the search for Ray Gricar, and the impending collapse of the entertainment industry. I might work in some steroids in professional sports. But I plan no more posts on Katrina.
Posted by Fûz at 21:46 No comments:

Not gonna lose my pension over this

Should I be invited to respond to Katrina, I will consider myself duly briefed:

New Orleans' lawless superintendant of police, P. Edwin Compass, has declared, "No one is allowed to be armed. We're going to take all the guns."

The Compass order appears to be plainly illegal. Under section 1983 of the federal Civil Rights law, any government employee who assists in the illegal confiscation would appear to be personally liable to a civil lawsuit. Moreover, higher-ranking officials--such as the National Guard officers who have ordered their troops to participate in the confiscation--would seem to be proper subjects for impeachment or other removal from office (and attendant forfeiture of pensions), depending on the procedures of their particular state.

All police officers, National Guard troops, and U.S. Marshals take an oath to uphold the Constitution and the laws. It appears that carrying out an illegal order to confiscate lawfully-owned firearms from homes would be inconsistent with the oath, contrary to sworn duty, and perhaps a criminal act.

Insect Fear Films of the Nineteen-Fifties 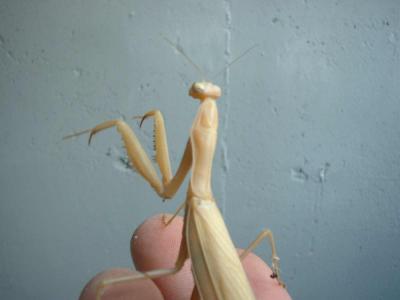 Boy found this monster in our basement stairwell. He and Firstborn ran to me to tell me about it. I grabbed the camera.

He didn't have a laser on his forehead but he was ill-tempered.

Note to Blogger: I ain't at all happy that the photo uploader feature does not work in any of the 3 web browsers on my OSX 10.2.8 Mac. That would include Safari, Nutscrape 7, and IE 6. One way or another I was thwarted and had to sneaker-net the mantis image from the Mac to the notebook to get it uploaded.
Posted by Fûz at 22:37 No comments:

By the way, these boots were the original inspiration for this weird idea for a combination of powered armor, and the preference for the kangaroo-slash-velociraptor form factor over an upright human one.
Posted by Fûz at 20:36 No comments: