Blade-Tech and Mojo: Help me to help you!!

I don't know how many of our four dedicated readers are involved in the day-to-day operations of a business, so here's a little tip: the sweetest money-maker any company can have is a product they already make that suddenly has a new application. Just crank up the marketing machine and start selling!!

This post is about two products I've found that work wonderfully outside their advertised "envelope" but I can't seem to get their manufacturers on-board with their newly-widened market, however narrow it might be. I have the greatest respect for these two companies and I've spent hundreds of dollars on their products. But my efforts to inform these folks of these newfound applications have fallen on deaf ears. So I'm going straight to the masses with this information, marketing departments be damned!!

Our first exhibit is a Blade-Tech Kydex inside-the-waistband (IWB) holster for my Taurus Tracker M44C. The M44C is a 5-shot revolver with a 2-1/2" barrel. The Tracker frames are mid-sized, kinda' like the S&W L-frames. Finding a holster for this revolver has been more than a bit frustrating; finding an IWB even more so. I have numerous Blade-Tech holsters and I thought maybe a quick call to their customer service would result in a score. They told me that the Taurus frame was incompatible with anything made by S&W and that I was pretty much out of luck. Hmmmm.....

I'm not gonna' say I didn't believe them but I was skeptical. Having more dollars than sense, I figured I'd roll the dice and order one anyway, despite what they told me. On the fitment pull-down, I selected a S&W 686 (L-frame) and set the barrel length to 2-1/2". I crossed my fingers, hit 'buy now', and proceeded to wait about four weeks.

(See how I just saved you four weeks of waiting?? You can thank me later...)

And it finally arrived. With barely controlled anticipation, I ripped open the package from Blade-Tech and, with all eleven fingers crossed, dropped the M44C into the IWB. Perfect fit. Perfect. Fit. 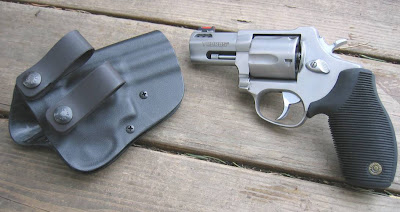 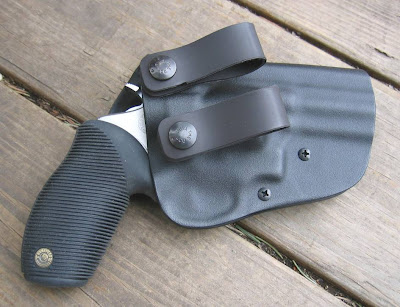 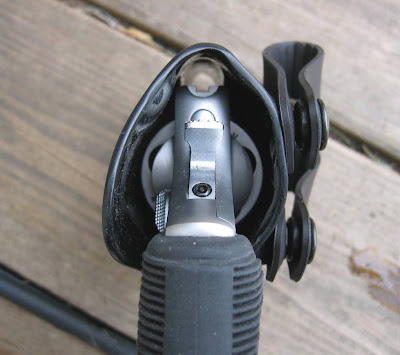 I quickly shot-off an e-mail to Blade-Tech to let them know that there's a revolver they can add to their IWB fitment pull-down.

Nothing. Absolutely nothing. No e-mail response. No added revolver. Nuthin'. What's a guy gotta' do??

Next up, Mojo. These folks make aftermarket ghost ring (peep) sights for a decently-wide selection of Euro mil-surp rifles. I have a Mojo on damned near every Mosin, Mauser, AK, and SKS I own. They're great and I love'em!!

Well, a few years back, I bought one of those Romanian ROMAK PSLs. (Don't dare call it a Dragunov in my presence. I was the proud owner of a real Dragunov for a few years and the PSL isn't even close.) I was one of those unfortunate souls to have bought a PSL with the caddywampus scope rail. With the scope in place, it hangs off to the left and points downward. Getting it zeroed at 100 yards meant cranking the elevation turret to the point where the reticle was very nearly at the top of its range of adjustment. And when the rounds were finally on paper, it wasn't terribly accurate. It was ugly, folks. Really ugly.

I'd made up my mind to sell it but had an idea. I'd never shot it with its iron sights and I wondered how it'd do. I had a Mojo Micro-Click that I'd ordered for an AK that I'd just sold and, on a whim, set myself to installing it on the PSL. It dropped in place just as easily as it would have installed on an AK. 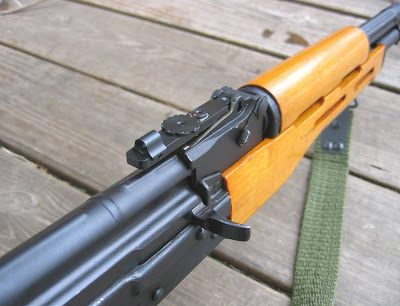 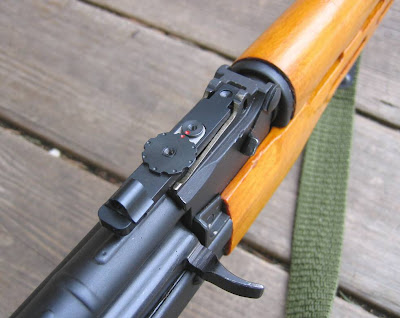 I took the PSL to the range the next day and I'll be damned if it didn't shoot better than it had when the scope was installed!! In fact, it groups almost as well as my Mojo-equipped Finn-Mosin M39s. No way was I gonna' sell it now. I dumped the scope into the bottom of the gun-junk drawer and never looked back.

Mojo's fitment page mentioned nothing about the AK sight fitting the PSL. Again, I banged-out an e-mail and sent it off. At least Mojo responded with a 'thanx' and indicated that they'd research the matter, post haste.

Now don't get me wrong -- I'm not trying to bad-mouth these two companies. They make great kit and I'm sure I'll continue to fund their kids' college educations be buying more of their stuff. But they need to pay attention to what their customers tell them. Granted, I haven't done the equivalent of opening the Orient to their products but selling a few dozen (hundred?) more line items oughtta' be worth the effort it takes to add a couple lines of text to their web-sites. Sheesh.

So, there you have it. If you shoot a PSL with iron sights or you're looking for a Kydex IWB holster for your Tracker M44C, Mojo and Blade-Tech have you covered, respectively. Just don't look to them to tell you about it.

TCM
Posted by TheCabinetMan at 14:26 5 comments: