We've mentioned our Middlechild's idiosyncrasies, and how we've investigated them to discover that she suffers from sensory integration disorder.

We now take her for weekly appointments with an occupational therapist, who has tested her in various ways to identify exactly which senses are not integrating. She has an unusual posture, which makes her easy to topple and causes her to hang on people instead of standing beside them (very trying at Mass, for example, and a pain in the neck to her classmates).

There are some vestibular problems, which compound her problems with balance. We learned that getting dizzy because one has been spun around is a compensatory mechanism that prevents even more serious problems, and Middlechild's compensatory mechanism is faulty on one side. Spin her one way on an office chair, for example, for a few seconds and stop her, then time how long her eyes retrace side to side. If they don't retrace, or if there's a significant difference in how long the eyes retrace after clockwise versus counterclockwise rotation, there's a problem. Her eyes didn't retrace at all when she was spun in one direction versus the other.

It's all treatable, thank God, without meds or surgery, just exercise. The weekly appointments seem to be succeeding, though slowly. Riding a skateboard into a crash wall was suggested, so we saved up egg cartons and filled them with expanding foam to make a crash wall that will endure more than one crash. It will even bear Middlechild's weight, in fact, if any other SID parents are tuning in---email for the recipe. A WalMart skateboard was found for about five bucks. 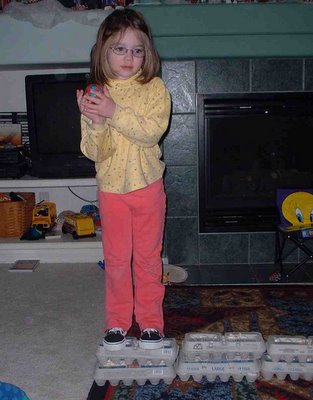 Core muscle tone, endurance, and proprioception are also a problem, so I have broken out our old taekwon-do notes and now lead Middlechild and Firstborn through some stretches to loosen the posture and give her a feel of where her body parts are.

We regularly ask her what her "engine level" is, to make her alert to her activity and how it affects her attention. She bends close to her work, letting her hair fall around her face, just to block out distractions around her. She can't look me directly in the eyes for more than a glance, unless our noses are touching and my eyes converge into one "bigeye" to her.

The testing is also where we got our first unbiased suggestion that Middlechild is bright. Out of sync, but bright.

We started the testing on our own, without the assistance of her school, because we were warned by other parents that, being a government entity, the school will be slow to respond. We were also warned that such entities are predisposed to not act---their obligation to act, and the funding to support such action, is warranted only if there is "scholastic impact." Luckily, Middlechild's kindergarten teacher, who first flagged us to the seriousness of this condition, understood that predisposition and couched her observations accordingly.

We owe this woman big-time.

Middlechild has gone through SIPT testing and three months of occupational therapy while the school was forming their team and getting it into action. They reviewed their findings with us this week, and I'm still getting my head around it.

Her teacher, a social worker, a nurse, the district's occupational therapist, and the district's psychologist all participated in the meeting. Nothing surprising, most of it already determined by our occupational therapist, though they used different testing instruments. But they were almost giddy in describing how they enjoyed examining Middlechild and comparing notes on her. They discussed their findings in a prearranged order to put the psychologist last.

For a reason. The crescendo, the climax, the point of the buildup in suspense: the psychologist determined that her instruments are in fine working order and do not lie. Middlechild is not just bright, she has an IQ in the ninety-ninth-plus percentile. She has few friends, and has apparent difficulty making friends, because other 5-year-old kids don't grok her. Some of her other behaviors can be explained as easily by her IQ as by SID.

My first reaction was ambivalence. She's a blessing. She's gifted. It wasn't obvious but now makes sense. I'm proud of her. I feel closer to her.

But GT kids can be as difficult to raise as learning-disabled kids. They can be moody, demanding, depressed. Their intellect outraces their emotional development. School, even Montessori, may not be challenging enough for her. A few visits to message boards confirm this.

I don't want to happen to her what happened to me. I was a gifted child too, and grew up to think The World Owed Me Something.
The catastrophes that ensued when I found out that the world's debt to me would forever go unpaid were staggering. My siblings had similar gifts and dealt with them in various ways, heavily influenced IMO by their birth order.

I don't want Middlechild to know she's gifted, at least until Barbaloot (gifted also) and I figure out how to explain it to her. But she already knows, inarticulately, something's going on, and so does Firstborn. Friction has already resulted, though Firstborn is no slouch either.

So on one hand, we are excited and thankful. On the other, I am privately worried, and shared this concern with Barbaloot. Her reply: "May you live in interesting times."

One downside of the meeting is that the school has built their case that they need make no special intervention for Middlechild; obviously, there is no impairment in her scholastic progress, though she can make her classmates uncomfortable as hell. The upsides, her teacher sees improvement in her behavior, cooperates in strategies suggested by her OT, and can influence which teacher will be responsible for Middlechild when she enters first grade. But otherwise, the district perceives no cause for action. That chaps me a bit, and we'll revisit that when we have more information.


In the coming years, we will use this space to share our experiences of raising Middlechild, in the hope that other parents will find useful advice, or offer it, among Fûz's usual rants about limited government, RKBA, homebrewing, and national defense.

We've been coaxing Barbaloot to offer her thoughts here too, but don't hold your breath. Toad's schedule needs to settle down before she can read what I've written, let alone write her own. At the present rate, Middlechild will post her thoughts here first.

It happens that we have never to date posted a picture of Barbaloot. You get another view of Toad, and one of the cats, in the bargain: 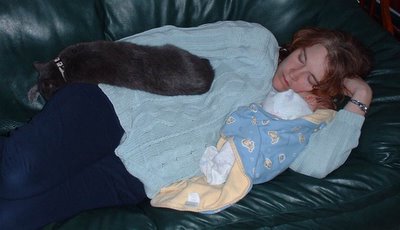 Toad has a powerful sleep-inducing effect on people.
Posted by Fûz at 21:01

Lest anyone doubt the combined power of Montessori and charter schools:

This is the work of a kindergartner: 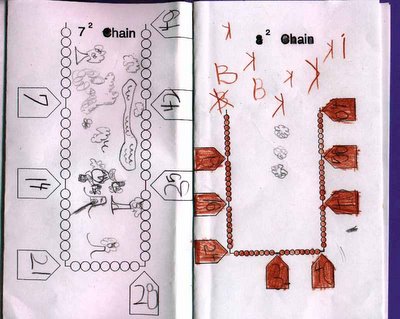 Not just multiplication, but the beginning of grasping exponents.

I just called both of Colorado's Senators, urging them to kill S.1805, the Protection of Lawful Commerce in Arms Act. Amendments have been added to it, both to reenact the assault weapon ban (renewal is a euphemism) and mandate Brady background checks on private sales at gunshows.

Don't trust the House conference to strip these provisions when the Senate and House versions are reconciled. Don't trust the NRA to hound the conference to do so. Let's see how many NRA A- or B-rated Senators actually voted for the amendments, or will vote for the full S.1805 as amended.

We can do without the lawsuit immunity if the present court track record continues, and more states enact immunity laws on their own. Rather than take a medium win with two huge losses inside it, let's take a medium loss on immunity and deny the banners their two wins.

My wife and in-laws presented me with a gift lo three birthdays ago, a Rocket eBook model 1100. A nifty device about the size of a paperback, that would download, store, and display eBooks. I already had been spanking the Palm for two or three years, and was reluctant to begin traveling with yet another gizmo, its case, charger, and associated cables, so it went mostly unused. The choice of materials to read on it was underwhelming too, compared to AvantGo material I was already downloading to the Palm.

Years have gone by, and I'm thinking about an MP3 player, but too stubborn or stingy to buy one. The eBook has audio capabilities aboard, and a slot for SmartMedia storage, and it's otherwise unoccupied and in good working order.

Anybody ever hack into these devices and repurpose one into an MP3 player?
Posted by Fûz at 22:54 No comments:

The usual Catch-22 that attends any liberalization of concealed-carry laws it that to get the CCW license, one must train under a certified instructor. But the State who will issue such licenses has not provided for the instructors themselves to be trained or certified. Any tactic they can use to delay the issue of the first license is justifiable, and the instructorship delay is the easiest.

Ohio is case in point. Good friend James Rummel has already trained hundreds of Ohioans, at his own expense, and is eager to earn his certification and serve his fellow citizens in that expanded capacity. He estimates he'll need $500 bucks.