The POS dishwasher we got with this place began tripping the GFCI outlet we put in a year ago. It tripped the GFCI with increasing frequency until, last Friday night, the damned thing wouldn't even run, just trip the outlet as soon as it was turned on. The GFCI even arced when I reset it with the dishwasher on and ready to draw current.

Mama-san insisted there might be problems with the wiring. I dug through it, even replaced the GFCI outlet in case the arcing had ruined it. While I had the unit out from under the cabinet, I noticed corrosion gunk all over. 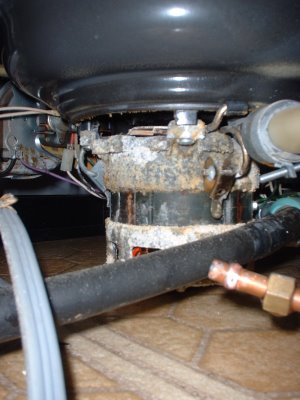 The house wiring looked OK though the dishwasher's didn't. I plugged the dishwasher itself into another circuit (I dragged an extension cord in from the garage) and it blew that GFCI instead.

So off to the local big box to bring home a replacement.

This is the third dishwasher to have been in this house; the water supply line had an extra length spliced to it with compression fittings for the unit I removed. With that extra length gone, the original supply line reached the new unit comfortably. So a house built in 1973 goes through two dishwashers in 33 years, meaning a dishwasher lasts about 16 years?
Posted by Fûz at 23:04 No comments: