Life is full of difficult choices

Aqua Teen Hunger Force. Too easy.
Posted by Fûz at 21:11 No comments:

Gotta give them more credit

An undetermined cable news channel was playing in the barbershop today. As I sat down for my haircut, the Korean woman asked me how I wanted it cut, then asked whether I preferred a flat income tax or a sales tax to replace it. Of course I proposed the FairTax. "Oh, Neal Boortz is on TV talking about FairTax!" she replied.

Get this, now: this woman, obviously a returning soldier's bride some years ago, is still improving her English and putting it to work. It was hard to carry a conversation with her, considering her accent, and the noise of her clippers right behind my ears. She mentioned how people look for shelters against income taxation, farmers seek subsidies, and so forth.

Still, it was clear she understands how taxation affects motivation to earn, save, and spend, probably better than most members of Congress.
Posted by Fûz at 21:20 No comments:

After realizing I had written some material that doesn't "fit" here or on the other blogs, I asked Bacchus if he'd host it over at his place. He graciously accepted.

If you go read that, then go read my post where I appear to take sides with Cleanfilms, you'll see what you might think is a major reality disconnect.

I went on a CD buying spree recently, and found a two-disc set of Fountains of Wayne material. Dutifully shoveling it into my player, I never got around to listening to it systematically---when it shuffles to the top, that's when I hear it, usually during afternoon sessions on the treadmill, when I'm not paying the best attention to it.

The song was halfway through when I realized it was their cover of Britney Spears's Baby One More Time. Likeable, clever.

Got me to thinking: another song I'd like to hear, that flat-out does not exist, is Shania Twain singing Led Zeppelin's Hot Dog. It wouldn't matter much to me whether she changed the lyrics so it would be a woman singing about being left by a man, rather than a woman abandoned by a woman; though the latter would be a hoot.

Maybe there's a term for this technique, of gender-changing the lyrics of a love song so the other sex can sing it without suggesting same-sex love? Who would know that term? David? Chaz?

And that reminds me also of a very sophisticated table-turning, where Bobby Vinton's Roses Are Red becomes Florraine Darlin's Long as the Rose is Red; definitely Chaz's territory, though to date myself, I used to have the 45's of both.

(Christina Aguilera's Will the Real Slim Shady Please Shut Up? does not count: it's satire.)
Posted by Fûz at 21:10 No comments:

Another face I hoped to see again

She was great in Adventures of Pete and Pete.
I recognized her instantly in Buffy.

Glad to see that Michelle Trachtenberg has her own movie. I probably won't watch it, even though Kim Cattrall is in it too. But it's worth a mention.

Update: but please, Hollywood, don't make her up to be a perky-titted tart.
Posted by Fûz at 21:05 No comments:

How to kill a Sunday in Albuquerque? I arbitrarily pointed the rental car to Cuba, figuring that would take me up into the hills, then I could cut east to Los Alamos.

That took me through Santa Fe National Forest, and right past this place: 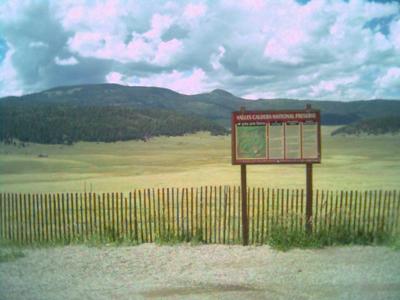