Something I don't see every day
I'm becoming somewhat attached to a German restaurant here at Undisclosed Remote Location. This is the first time I've seen it busy. A wedding rehearsal party took half the dining room. But at a table next to mine I saw something truly beautiful: four generations dining together. A girl, maybe five years old, then the mother, a blonde six-footer, her mother, also tall, and the great grandmother, stooped with age but alert and proud.

I wanted to say something to them, about how remarkable it was to see them together in one place, but how to say it, without being taken for a lunatic who can't mind his own business?

As they left, I overheard that Great-Grandma was visiting from Germany.

Sadly, my in-laws will never see such a day. Barbaloot and I married later in life, and are raising children later too. My parents are already gone, hers are in their seventies. There's little hope our kids will have kids before the ir grandparents, my in-laws, pass away. Maybe that's why I had this urge to say something to them---to try to share their moment because I will probably not be participating in such a moment of my own.
Posted by Fûz at 22:58 No comments:

Lizard cavalry
(This post has been brewing longer than this blog is old. Thanks to Alphecca, who pointed me to Bill Dennis's HeinleinBlog, where was posted a quote by James Pinkerton, who noted that Starship Troopers foresaw the cybernetic future of infantry. Thanks also to James Rummel, who reminded me of the older material in an offhand mention of powered armor. Sometimes I feel like James Burke.--Ed.)

This article in Wired discusses the development of robots for military roles. The difficulty remains in integrating sensor inputs and connecting them to motor outputs, i.e. all of those tasks that human brains seem to do easily and quickly. The developers estimate that it still takes 4 people to manage 1 robot, and DoD's goal is 1 soldier to manage 4 robots. We humbly submit that they're solving the wrong problem, and ignoring the damned good soon for the uncertain future best.

What might shorten their development time, and result in some useful weapons platforms in the meantime, is to develop larger robots that carry soldiers inside them. Miniaturizing the motors, computing, sensors, and so forth is already done, so use it and perfect it while the numbercrunching improves. Work on just the locomotion, for example, and focus on numbercrunching locomotive control systems that have already been debugged by evolution. When the computing power matures to the point that machine "awareness" and vision are feasible, put it into the robot and take the soldier out. Menawhile, serious computing power will still be needed to make the robot respond smoothly to the soldier's commands, and that in itself will advance immensely the technology needed to field the objective unmanned versions. Heinlein's protagonist in Starship troopers described "feedback loops" to guide the powered armor. Feedback loops aren't fast enough.

Meanwhile, other DoD projects seek to armor a soldier to create some kind of Frankenstein---not genetically modified, just a stronger and harder human-shaped platform, like Ripley in the Caterpillar loader in Aliens. The problem there is that the human shape is not optimized for strength or speed, but for use of the forelimbs for grasping instead of locomotion, and gaining height for distance vision. We're on our hind legs instead of all-fours not because it's inherently stronger or faster. If you want stronger/faster/carry-more-weight, you'll have to give back some of the bipedal compromise.

For example, the allosaurus weighed about 3 tons, was about 5 meters from tooth to tail, and could move at a burst of about 30 kilometers per hour, regular stride at 15. It won't keep up with an M1A1, or even a HWMMV, but it's not supposed to. And it will prevail in terrain or among obstacles that get these other two platforms killed. So borrow the blueprints.

Merge these two initiatives, the battle robot and the powered-armored soldier, making sensible tradeoffs. Get the first iteration into the field and tweak it while the computing power catches up.

The operator sits like a cyclist in a close-fitting compartment centered inside the lizard's hips. His legs extend into the lizard's legs. The lizard's head puppets the operator's head and neck movements; its legs move as the operator's legs move. The tail is animated to keep the lizard balanced whether it's in a dead run, or turning, or jumping, and it's where fuel is kept and hydraulic fluid is cooled off. The first numbercrunching problem to solve is animating the tail to balance the rest of the lizard's body while it runs, turns, corners, jumps, ducks, and cranes.

We will have a platform that could go where only infantrymen could go today, but carrying weapons that infantrymen cannot use on the move. It could clear obstacles that are death traps for infantry today, specifically those found in MOUT.

{salespitch}
Colonel, got your fire team pinned down in a parking lot by snipers on the roof? Two lizards can run in to offer cover fire and escort them out.

Need to flush a squad out of a warehouse? Two teams of three lizards will fit through a loading dock door, split up and manuever inside. They might even be able to ride a freight elevator.

Want to interdict a supply route? A Chinook full of lizards can catch the column from behind, trash it, and run away to board the flight home.

The supply route is on canoes across a swamp? This lizard can move through water or mud a meter deep, and still shoot and salute. And it can hide with only its "eyes" above water, waiting for the boats to slip nearby.

Sarin on the battlefield? With the right climate-control package, the human inside works in shirtsleeves. Bio or chemical contamination will not affect the lizard's speed or manueverability. If the operator is unhorsed, he pulls his chem gear on before climbing out, and he's in no worse shape than an armor crewman on foot.
{/salespitch}

Sure a tank round or even an RPG will take it out. Train the riders like we train our Abrams tankers and they'll be fine. Fire on the move, and move constantly. And have the sense not to take on tanks if you're not a tank.

That's the first generation. When and if the sensor-integration problem is solved, remove the human, push the size to 3 meters nose-to-tail and 750 kilos weight, and kick the land speed up to 50 kph. Then you're delivering Jurassic Park IV to the DoD. Ride the freight elevator? Sheeeee-it. It could take the stairs.

Teach these lizards to hunt in packs, and always employ them in packs, because machine vision will benefit from having more eyes. They'll beam video to each other so all of them will "see" more than any one of them alone.

We offer this concept merely as a patriotic duty. We ask only that two be set aside for an occasional ride by Emergent Behavior and myself (ask 'Merge how much he likes motorcycles). We'll bring them back gassed up and washed off. Promise.
Posted by Fûz at 22:47 No comments:

Packing on private property
One of the thorny issues we struggle with in our examination of lawfully-regulated concealed carry of a weapon is what happens when the person carrying crosses some boundary between public property and private.

As a libertarian, I would agree as a matter of course that the owner of the private property has a right to decide whether to allow other persons to carry concealed on his property. That boundary blurs, though, when the private property happens to be a business open to the public, such as a video rental, grocer, department store, and so forth.

There's no expectation that the property owner will know each person, even a significant fraction of the people entering the property. And the owner per se is very likely a body of shareholders spread across the United States. I can't call it private property for the purpose of delineating who's allowed on the property, and whose presence armed or unarmed constitutes trespass.

Many state with licensed shall-issue concealed carry address this problem by requiring those places that want to exclude CCW to post a notice at each entrance. At least one state, hoping to reduce the number of businesses who would post such notices, specified the signage so it is big enough, and obnoxious enough, that few businesses would go to the trouble.

The gun-nut's wet dream is a civil suit against a business who posts, making the business jointly responsible for any injury or death suffered by a person who would have carried but didn't because the business told him or her not to. This approach leaves me cold, of course, because somebody is going to have to suffer an attack for the suit to go forward.

I propose instead the Courthouse approach. Courthouses and other government buildings are required in many States to provide secure storage for weapons.

Your video rental outlet doesn't want CCW on premises? OK fine, where's the locker? State law says you need one locker, 8 by 8 by 14 inches, for each 200 square feet of store space, and it has to be accessible to both the entrance and exit doors. You may charge a deposit for the locker key of no more than ten cents. A Target could handle it, piece of cake, because of how their doors are arranged.
Posted by Fûz at 20:41 No comments:

Another try at the Pinnacle 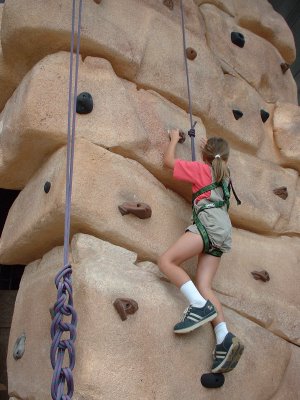 Firstborn took another climb at the REI pinnacle this weekend, getting a good two meters off the floor before chickening out and being lowered by the belayer. Middlechild gave it a shot too, sorry no pictures.
Posted by Fûz at 14:11