(In the CD player: Ixnay on the Hombre, The Offspring)

As most of you are aware, CCI is pretty much the "industry standard" for pistol-caliber shotshells. The little buggers are sold mostly to snakeaphobes, though I'm sure a few are bought just for kicks. CCI makes these shotshells in three (centerfire) semi-auto calibers: 9mm, 40 S&W and 45 ACP. Unfortunately, CCI specifically calls-out that these three shotshells are not to be used in revolvers of respective caliber. They bind-up the cylinder in rather unpleasant ways. Because I'm an RTFM kinda' guy, this has not happened to me personally. I've learned from others' mistakes.

While I'm sure that heapin' plenty of God's little critters have succumbed to CCI's factory loadings across the available calibers, I've always felt that the .4X were the smallest loadings I'd trust for serpent. I have a handy-dandy SP-101, which would be an ideal setup were I trusting in the 357 shotshell. But not so much trust here. Next up is the 44 Mag, of which I have two candidates. One is a Redhawk that's a bit too unwieldy for the task, the other a 2-1/2" Taurus Tracker. The latter has a ported barrel which, unfortunately, CCI says is a "no-no" for the shotshells. (RTFM, remember??...) So the 44 is out. The other two .4X offerings are 45 ACP and 45 Long Colt. I want something that can guarantee a follow-up shot so the 45 ACP in a semi-auto is out. I don't have a 45 Long Colt so that's a non-starter.

What's a girl to do?

Well, what I do have are two 45 ACP revolvers. A S&W 625 and a 325 Thunder Ranch, both with 4" barrels. The 625 isn't a whole lot lighter than the Redhawk but the 325 is very light, being divined of a magical Middle Earth compound known as scandium. Knowing that I can't use CCI's 45 ACP shotshells on this platform, I figger'ed I'd set out to roll my own 45 ACP revolver loads.

(It's at this point that I must interject that reloading data follows. This data worked wonderfully for me, in my gun, with the batch of components I had on hand, on the day I did the testing. The same cannot be assumed for you. By duplicating these loads for your own use, you assume all risk of death, dismemberment, or damaged guns and hold harmless Yours Truly in the case that any or all of those unfortunate events actually come to pass. Legal mumbo-jumbo, blah, blah, blah...)

Referring back to an article written by Mike Venturino (American Handgunner, Jan/Feb 2007), I started formulating a plan. Mike loaded his 45 Long Colt shotshells with 45 caliber Speer shot capsules, #12 shot, and Unique powder. So I snagged a box of the capsules, scrounged a ten-pound bag of #11 shot, whipped out my own jug of Unique, and set myself to loading. I went with #11 shot since I wanted something larger than #12. (If you've ever seen #11 or #12 shot, you'll understand that "larger" is a strictly relative term...)

The shot capsules hold 163.5 grains of #11 shot, or about 408 pellets. The capsule and shot combined weighs almost exactly 180 grains. Mike used 9.0 grains of Unique in his 45 Long Colt load. Speer recommends 7.5 grains for the 45 Long Colt. So I figger'ed I'd start with 6.5 grains of Unique for the 45 ACP. I seated the capsules by hand -- squishing them in place between a scrap piece of 2x2 and my reloading bench -- to an OAL of 1.55", +/- 0.03 depending on who manufactured the shell casing. I used a 45 ACP Lee Factory Crimp die to make a taper crimp. (Since I also have a 45 ACP roll crimp die, I tried that. Fail. It just managed to crack the capsule and send #11 shot scattering everywhere...) 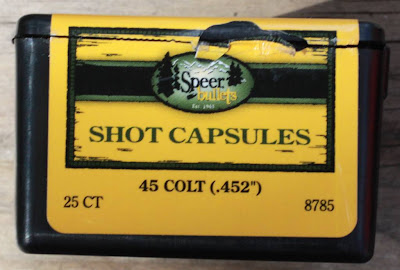 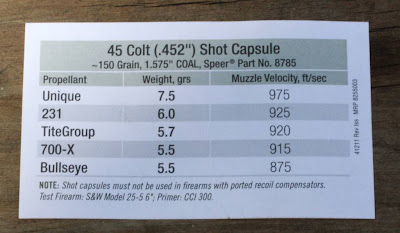 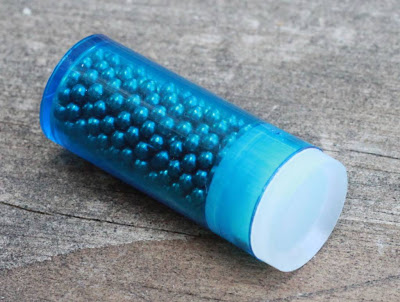 As you can see, the capsule extends quite a ways out the mouth of the case, despite a rather deep seating. 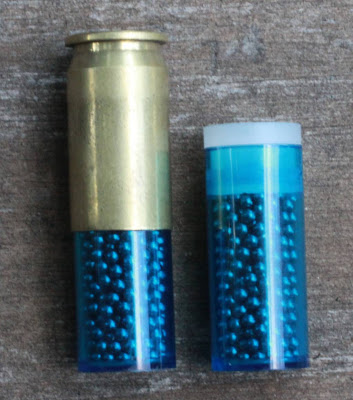 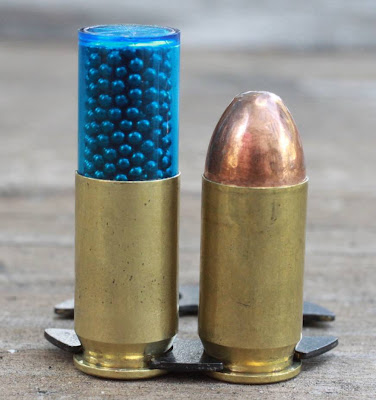 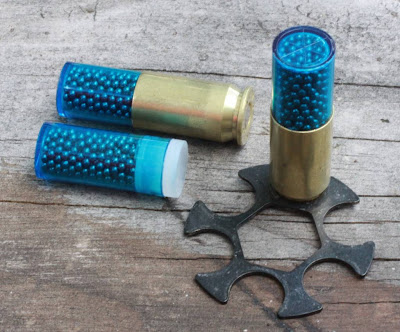 But it still fits in the 325's cylinder with plenty of room to spare. 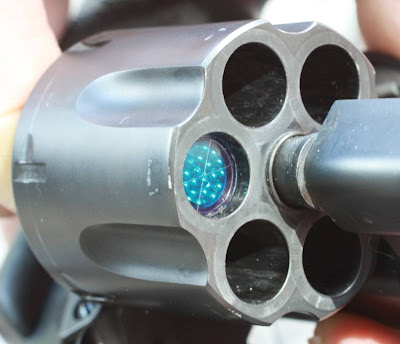 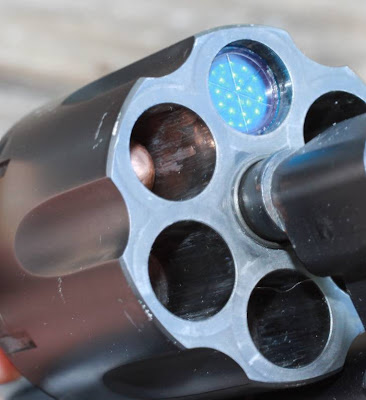 Just for grits-n-shins, I tried chambering one of them in my 1911. It didn't work, the capsule catching the rifling well before the case could headspace.

Then it was off to the range. (Unfortunately, I forgot the camera. So here are your thousand words...)

In a nutshell, the experiment was a success!! The patterns made at roughly 10 feet were exactly what you'd expect: ~18", with good distribution. Recoil was noticeable but mild. There was nothing untoward as a result of using the capsules: no plastic shards flying about or jamming up the cylinder works. Cases extracted w/o problem. Sorry, no chrono data.

One thing I wanted to check -- and I'm glad I did -- was "capsule creep" due to recoil. I loaded one moon clip with five of my 200-grn FMJ match rounds and one shotshell. I "staged" the cylinder so that the shotshell fired after the five match rounds. Indeed, the capsule crept out of the case and would have bound the cylinder. Admittedly, I didn't have the tightest taper crimp on these loads. I'll need to do a bit more experimentation on the crimp. Probably a few cycles of "tighten it until it snaps, then back off a 1/4 turn." Even if I can't get the exact crimp I want, the shotshell would always be staged to fire first and recoil creep would be a non-issue. Still, I wanna' get it right...

Finally, Mike V. used the "potato test" as criteria for an effective shotshell load. He believes that if one of these babies blasts apart a raw potato, it's good enough for snakes. Well, my 45 ACP loads sent a spud to the Big Potato Patch in the Sky. In many pieces!

So, if you have 45 ACP revolver that you wanna' roll some shotshells for, have at it. It can be done.

TCM
Posted by TheCabinetMan at 17:05 3 comments: