We went to a picnic yesterday. A nearby lake offered catch-and-release trout. Boy tried his hand. As I stood with him, he cast and reeled in, over and over, catching nothing on his wormed hook but stringy moss. Every time, as he felt that little resistance to the reeling in, he shouted excitedly, "Dad, I caught something!"

About the hundredth time, after all the other kids had given up and left for another picnic event, he shouted again. OK, what this time? A boot? A soda can?

He reeled it in, and the rod actually bowed toward the water.

Then the line began to dart back and forth across the water. I'll be damned. 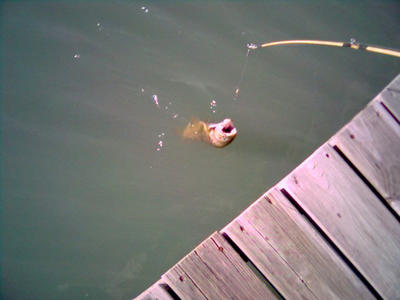 I helped him pull it close, shot the photo above with my phone, then rinsed my hands with water from the pond and took it in my hands and laid it on the dock so he could see it. A fourteen-inch speckled trout. I didn't keep it out of water long, it was bleeding all over and starting to get listless.

No fisherman am I, I didn't know how to get the hook out. Boy was ecstatic. I lowered it back into the pond and kept a grip on the line, then called a bud, who ran out, verified the measurement, and was about to show Boy and me how to free him. Just then, the trout bit through the line and was gone.