Who is the master, you or the word?
Kim duToit announces, correctly, that attrit and surveil are not words. They are sawed-off verbs made from Pentagonese nouns. I have been observed using the former, just last Wednesday in fact, but I have resolutely refused to use the latter.

I would direct your attention, however, to the usage based on. The word based in this case is a past participle. Without feverishly rifling through Strunk and White, I don't think one can cast a sentence with two participles in a row, one modifying the next.

" . . . our procedures must be modified based on the current situation"

is not acceptable, and causes the listener to grit one's teeth. How about "modified on the basis of"?
Posted by Fûz at 22:01 No comments:

If shooting is viewed as sex, then reloading must be foreplay.

Over the last few weeks, I have tumbled almost 700 empties of five-five-six, trimmed or culled them to 1.760 inches plus .001 or minus .002, swaged the primer pockets, and chamfered the necks. Note: Hirtenberger's primer pockets are rather loose; that must be why they are crimped. Lake City's are tight. Swage them all, they seat without a hitch. There's remarkable variation in rim thickness too, so be careful trimming on case trimmers that grab on the rim.

Today I dusted off and reassembled the Suburban Clandestine Arsenal of Liberty, otherwise known as the Dillon RL550B progressive reloading press. 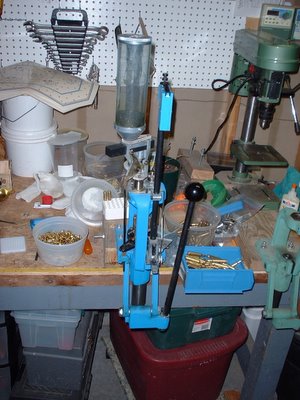 The first station is set up to prime only: CCI450, small magnum rifle. Though the RL550B can decap and resize, it is more consistent to do all of the resizing, decapping, and primer pocket swaging on the Rockchucker a few inches away (a slice of it is visible to the right in the photo).

The third station seats the bullets, which today are bulk 60-grainer soft-points that were made from swaged lead cores jacketed by extruded twenty-two long rifle empties. The "H" on the casehead is still visible, meaning these were Winchesters, IIRC. Corbin offers the kits and press to make these bullets, but that's fun for someone else with more time, who sells them to me.

The fourth station is the Lee factory crimp die, then the dump into the Akro-bin.

It took more time to set the press up, adjust the propellant charger to the right volume and set the seater and crimp, than to roll one hundred rounds. Don't tell Chuck Schumer.

A small dab of a loud-colored nail polish in the cannelure tells me which load to look up in the notebook.
Posted by Fûz at 20:59

To confuse the enemy, to help soldiers remember code words, and boost morale with humor
Group Captain Mandrake is amused by the choices of codewords for Operation James. If only Uncle Sugar had such a sense of humor.

In an upcoming exercise in the States, two operating areas will be codenamed Condi and Tori. Beats the heck out of Temuka and Caravaca.
Posted by Fûz at 18:13 No comments: