I'm ashamed to admit that I've missed every Buy-A-Gun (BAG) Day since its inception. I've never been one to wait around to buy something to commemorate a particular event. But that's not true this year! (Sorta'...) Even if it was an "semi-unintentional" BAG buy -- and I had to sell a gun to get it -- I will assume still earn a BAG point. (And besides, even if I did sell a gun to get this one, somebody else enjoyed his BAG Day, too!) 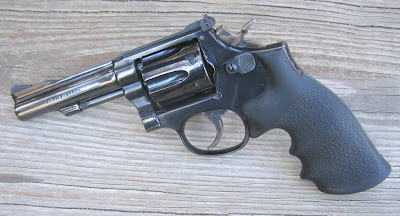 The revolver came with horribly mismatched target grips and while they were aesthetically pleasing (when viewed from only one side by someone with a short visual memory), they didn't really fit the hand very well. So I bolted on the Hogue rubber grips to match my 625 and 325 and all is good.

The back-story is that I'd been looking for a Model 63 on Gunbroker for going on a year. A few NIBs had gotten past me when I was short on funds and that ratcheted up the frustration factor. Then for a good two months, no 63s of note appeared for sale. An apparent drought.

Then while logging my daily read over at Tam's site, I was informed of something I'd never heard of: a Model 18 Combat Masterpiece. Really? A K-frame 22? Really? How had this gone unnoticed by me all these years? I admit that part of my lusting for a Model 63 was because of its stainless steel construction................, but a K-frame 22?

Oh, I had to have one. Off to Gunbroker.

I lost out on a nicely priced 98% Model 18 when the seller ignored my inquiries and another more daring buyer hit the "Buy Now" button. (The seller had two pictures in the ad and one was obviously not of a Model 18.) I went to the LGS and inquired about the "Classic" reissue of the Model 18 that S&W has out. $900 and indeterminate back-order duration. Unacceptable.

So back to Gunbroker. There was quite a disparity in "going price" for the listed Model 18s. Some of the rode hard and put away wet models were going for ~$450 but I just didn't like what I was seeing.* A few models were advertised as NIB or 100% -- and built before I was born -- but they were in the $1000+ range. I know that vintage Smiths are currently overpriced being sold at what the market will bear and I didn't want to contribute (too much) to that trend. One Model 18 stood out as being in 98% condition and (relatively) reasonably priced. I agonized over it for about 12 hours and did the "Buy Now" thingy.

One week later, I had it in hand. I took it to the range the same day to test it out. Unfortunately, the tornado force winds we'd been having for the better part of a week didn't give me as many warm-fuzzies about the data as I'd have liked. All things considered, though, it did well at 25 yards and at first blush, appears nearly as accurate as my Mark II 22/45, which up to this point has been the standard bearer for 22 handgun accuracy in my meager collection thereof. But until I can get out there under "normal conditions", I won't know its true accuracy.

So my old Mini-14 has a new home and I'm the happy owner of yet another Smith, one that I didn't even know about three weeks ago.


* Gunbroker should have a mandatory photography tutorial for its sellers. If nothing else, people, Google "macro lens" fercrissakes and learn how to use one. Lighting, too. I'm by no means an expert photographer but I can get a useful and informative gun pic out of my measly 4M-pixel Canon. I'm jealous of folks like Tam that have decent-sized gun shows locally. They can see/fondle first hand the goodies that are up for sale and not have to rely on someone else's (sub-)amateur photography skills. Why Colorado gun shows are an insult to the genre, I'll never know...
Posted by TheCabinetMan at 08:02 5 comments: