Well, Mister President, it's the Bees and Spiders again! They stole my food stamps and sol'em to the Rats!
I'm surely not the first blogger to observe this, but: deregulation is being blamed for the capital-w-worst capital-b-blackout in US capital-h-history, or as Scott Chaffin directs, the Great Northeastern Blackout of Ought-Three. At least I'm the first to use a Firesign Theater line as the title for it. I hope it's apropos.

Bush-adorers: watch how he handles this one. Blue-ribbon committee? Thorough inquiry? Donk-apologists: watch how your party's leaders try an En-run around the facts. Is this a tar-brush to apply to the GOP?

FoxNews, to their credit, hosted a talking head from Cato today, explaining that if there's a problem with deregulation behind this blackout, it's one of not having enough deregulation. Without the freedom of prices to reconcile supply with demand, nobody has the incentive to build and maintain generation capacity within his own market, and relies more heavily on drawing power from neighbors (across regulatory boundaries) during peaks. There's too much source-sharing (transmission) among markets.

The technical cause of the blackout will be ascertained quickly, probably before this post is even timestamped. It may indeed be a relay the size of Glenn Reynolds's fist, or a serial cable the diameter of Mr. Untel's urethra. Whatever.

The solution, the measure or set of measures that keeps this from happening again, is not technical but economic and political. It will not be found by any of the parties holding the power necessary to put it in place, because solving it does not deliver benefits to those parties. "Paging, uh . . . the Usual Suspects. Usual Suspects, please meet your party at the Committee Hearing in 2123 Rayburn."

Our Macs and dual-boot Linux/Windows boxes are on UPSes, I have five gallons of bitters to rack, and we're celebrating my wife's 40th birthday tomorrow. Have a wonderful weekend, be back Monday from Undisclosed Remote Location. Relax and have a homebrew.

Quote of the day

There are 135 candidates for Gov[ernor of California]. I'm not sure I want to be governed that badly.

I guess they don't like it
The new USAF tiger-stripe utility uniform is thoroughly dissed at Sgt Stryker, and mildly ridiculed there as well.

I admit, changing to new AF-unique camouflage uniforms is sending good money after bad---I need replacements for the Scope Shield radio and PSN-11, for example. If the AF wants a distinctive look in a uniform, go back to khakis, and save the BDUs and DCUs for bases and climates where they make sense. But as other commenters at Stryker have noted, USAF seems to have already decided on a new uniform, and seeks user comments just to cement the decision. So we might as well complain abouttry to add some functionality to the uniform they've already committed themselves to.

Pity if I'm just hip-shooting. I already wear BDUs, and I don't need to wear the tiger-stripes or work next to someone who does, to guess at how they will or won't work, and what should be improved about them. But then I'm a proponent of bringing back warrant officers, having worked for a few of them. So you can take my suggestions with more than the usual dose of salt:

Pin-on rank insignia, in a pattern distinguishable at very short distances from that of officers.
Cargo pockets that will hold an LMR comfortably.
Buttons arranged not to snag on camouflage netting.
A pattern other than Solar-Absorption-Maximized Black (that goes for the T-shirts too).
Posted by Fûz at 17:18 No comments:

The TIC awareness of premature death by congestive heart failure . . .

encourages me to run. A good 28 to 32 minutes, four times a week, over a course that gradually expands through my neighborhood.

This course takes me past a backyard fence on which grows a vine with deep green leaves, and large, soft-green conical flowers. Could it be? 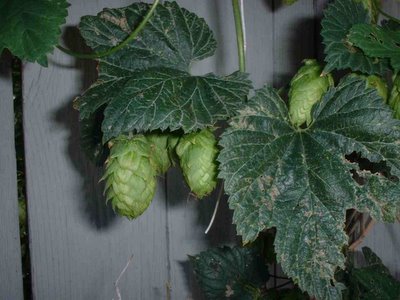 Yes. Hop flowers. Charlie Papazian describes them in the Complete Joy of Homebrewing as developing tiny yellow capsules of lupulin at the base of each petal as the flowers ripen, from mid-August into September. Boy and I walked there today and popped a flower off the vine, and found the lupulin. I rubbed the flower between my palms and smelled it. It's the real stuff.

Homebrew: just what I need to reduce my triglycerides.
Posted by Fûz at 16:34

Earlier this year, I was diagnosed with gastro-esophageal reflux disease, and was prescribed with Aciphex so I no longer felt like an alien was clawing its way out of my chest. Today, the Aciphex was switched for milder and less expensive Zantac.

Between deployments for Operation Enduring Freedom, my cholesterol was found to be high, and triglycerides even higher. This Spring, diet and exercise had reduced them considerably but not brought them down to levels acceptable for my doctor('s insurers). Doc said I drilled down the levels as much as diet and exercise are ever likely to do; the rest is genetics. So we try Gemfibrozil for six weeks, and another blood draw to see if I need to eat it forever.
Posted by Fûz at 23:45 No comments:

The WUTT Model for Concealed Carry Laws
A friend of mine is seeking a CCW license in Maryland. I took notes on our discussion of the pros and cons, and invite him to guest-post here about the experience when it's concluded. He is concerned, as many others are, that seeking a license to carry, in a way undermines our collective position that concealed carry is a right.

I'm ambivalent about this, and here's why. For your examination is my model for how, or where, CCW may be a privilege rather than a right. I'm not a Constitutional lawyer any more than I'm a nuclear physicist, but I firmly believe that constitutions, big and little "c", were written to be accessible to the layman, and that Occam's rule applies to their interpretation. Of course, all 18 of my readers are free to email me or comment below that I'm full of shit and ought to shut up.

I have a pdf of Colorado's CCW application on my desktop and have been toying with filling it out and walking it into the Sheriff's office. Colorado's constitution specifically denies that there is a right to concealed carry, which to me means that the legislature has the power regulate it (as long as the US 14th and 2nd are not violated, there's equal protection, etc) but may not outlaw it completely.

The regulation of concealed carry is a legitimate State power when Constitutionally reserved and when impartially carried out, considering that States should have relative freedom in legislating against crime, to find the best results and compare them with those of their neighbors---the "laboratories of democracy" argument.
States' rights don't exist: "As our Constitution is written, governments have 'powers' but no 'rights.'" (see Kozinski's dissent, page 5991, second paragraph in Silveira v Lockyer, and my brief comment on it).

In comparison, Vermont not only doesn't have a CCW permit law, Alphecca (who is not a lawyer either) explains that it can't, by her own Supreme Court's interpretation of her constitution. In Vermont, concealed carry is a right, out of the reach of Vermont's police power. This is how it ought to be with all states, except those whose constitutions explicitly deny a right to CCW, such as my present home Colorado. Last summer it looked like Ohio might end up like Vermont, swinging from one pole, no concealed carry by private citizens, to the other pole, a right to carry concealed simply because their Constitution protects an RKBA and doesn't reserve a power to regulate CCW, and their legislature has failed to pass a CCW law. I'm not following this matter (James, any news?). Alaska legislated both a CCW license system, and unlicensed carry in a very broad range of circumstances (scroll down to "Carry without a permit").

By this model, if a state has reserved the power to regulate but her legislature fails to or chooses not to regulate it, it is still not a right but it can't be prosecuted either. Colorado has a "traveling" exception to the permit requirement (CRS 18-12-105.2(b)).

Lest anyone think Colorado's constitution's CCW clause is unjust and violates the US Constitution's RKBA clause, well, Kentucky's has a CCW clause, and no less of a gun nut than Thomas Jefferson held the KY Constitution up as a model for the rest.

By my reckoning, if a state's constitution does not reserve to that state the power to regulate concealed carry, they can neither require permits nor prosecute those who CCW without them. The state's RKBA amendment or clause rules, statewide; if the state's constitution doesn't have an RKBA amendment or clause, then the Federal one suffices, and it is mute about CCW, unless you want to split hairs about the right to "bear" meaning "in plain view." Then you can run up against rulings that the RKBA does not apply to persons openly bearing arms in terrorem populi. The populi of Denver, Boulder, Colorado Springs, and a few other Front Range cities seem to be easily terroremed, and are frantically passing laws against open carry.

I ask these bozos: which would you rather have, because you have to allow at least one: open carry, or concealed? If both are outlawed, then the "bear" part of the Federal RKBA is violated.

So the foregoing is my model of how CCW ought to be. Of course that's not how it is.

This is one reason I'm toying with the app for Colorado: under their constitution, I see less problem with the new system than with the old (how can discretionary permits be legal under an equal protection clause?).

Take that same law to a state whose constitution doesn't reserve a CCW-regulating power, and does guarantee an express RKBA for the purpose of defending self (Pennsylvania?) and I get heartburn again. The blow was softened somewhat by the low cost, $13.50 for 5 years, and that it was ready in a week (this was 1993, much can have changed since then).

Don't get me started on New York.

So then, EB, don't kick yourself for duplicity in the System Breaking Us Down. Go for your CCW in Maryland and good luck, your constitution does not guarantee an RKBA so you have the Fed guarantee to rely on.

Many thanks to packing.org for concise and well-organized reference material.

Barsoom beckons
Firstborn sneaked out to the back patio with me tonight to look at Mars. She picked it out at once. While she was training my old Sears 7x35 binoculars on it, a Perseid blew in, cutting North to South. It burned up before she could see it.
Posted by Fûz at 23:17 No comments: