Home-Made Bandoleers (or Bandoliers, if you prefer...)

Sorry to be late getting this post up. I've been indescribably swamped at work since mid-December and it's only now easing up enough for me to do things like sleep and post.

Those who know Fûze fairly well know that he's the crowned king of DIY (Do It Yourself). I'm not sure there are many "sweat equity" production projects he's not willing to attempt: AK building, brewing, reloading, tanning, butchering, etc. He's not afraid of tools nor reckless experimentation. Fûze doesn't undertake these efforts to save money so much as to acquire the skills/knowledge they require. And if my fawning over his aptitude in this regard doesn't make it obvious, I'm horribly jealous. Being the perfectionist that I am, I'm less willing to tolerate failure and, thus, less likely to experiment. But I have my moments.

There has been some discussion of late on various rifleman websites concerning the dearth of mil-surp bandoleers, specifically those for 5-round 7.62 NATO stripper clips. I have a few of the Aussie bandoleers for this application and they are indeed nice. But I like my SKSs and AKs, too, and I wanted something to hold 10-round 7.62x39 stripper clips. Having solved this for myself a few years back, I thought I'd discuss my DIY solution with you folks -- our four dedicated readers.

I started out with a mess of these: 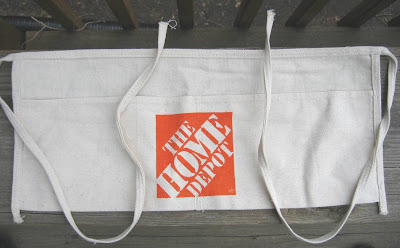 That's a Home Depot two-pocket nail pouch. They're heavy cotton and have two narrow tie straps at each end. The cost was a whopping 77¢ each. I ripped-out the middle (double) stitching -- which took no small amount of time -- and turned each one inside-out to hide the violently orange HD logo. Then I had three vertical stitches run, making four pockets. Like this: 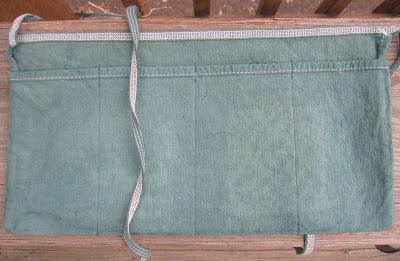 Not wanting the end result to be white, I picked up some fabric dye in "earth tone" colors. In this case, green, brown, and black. The original project involved 36 pouches so I dyed 12 in each of the three colors. Using a stainless steel kitchen sink, I submersed each batch of 12 pouches in the (very hot!) water-and-dye mix and let them marinate for about a 1/2-hour, stirring occasionally. I then rinsed each batch several times and ran them thru the washer-n-dryer to remove what dye was remaining and to shrink them to their final size. (I washed each batch separately to prevent color bleeding.) I ended up with this: 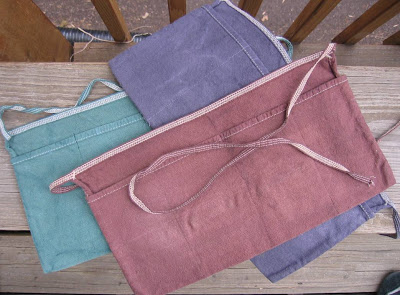 The lighting made the colors a little weird; they're darker than what's in the pic. Trust me, they're green, brown, and black! (OK, maybe not black, but definitely charcoal...)

Each of the four pouch pockets will easily hold three 10-round 7.62x39 stripper clips, for a total of 120 rounds: 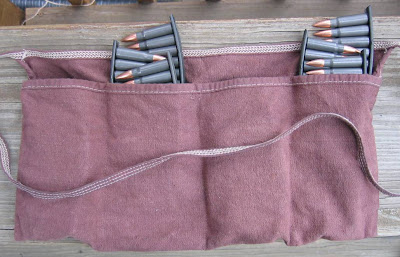 Just as an experiment, I took one of the pouches and applied some sew-on hook-n-loop (aka, Velcro) tabs to the top of each pocket. I thought this might offer some additional "retention security". It did, marginally, but I didn't think the ROI justified the effort and I didn't bother to "upgrade" any of the other pouches.

So, since this post was initially prompted by blogs addressing 7.62 NATO pouches, I wanted to see how mine worked with those 5-round stripper clips. The result was this: 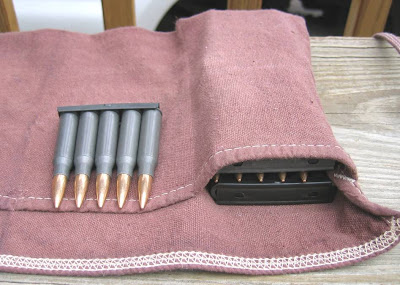 I can get six charged stripper clips into each pocket. They seem to be retained well enough, but only a "march thru the boonies" experiment would tell. I can say that due to the depth of the pocket, the bottom three clips are kinda' tricky to retrieve. Not impossible, but I'd hate to be fussing with it while dodging incoming fire. (YMMV...) If someone wanted to apply these bandoleers specifically to 7.62 NATO stripper clips, they could simply cut each pouch in half horizontally and restitch the bottom.

And just to see what else we can stick in these pockets I tried these 30-round mags: 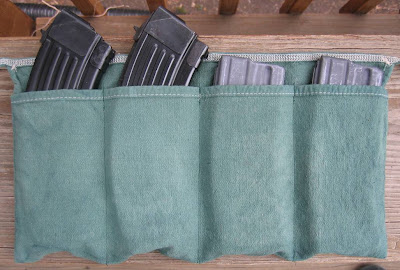 As far as I'm concerned, the AK mags are a "no-go". Too top heavy and they'd likely rattle. The AR mags would work in a pinch. They're not held very securely, though the pouches would probably work well with 20-round'ers. Then again, showing up at a firefight with 20-round AR mags is akin to showing up at a firefight with an AR. (Did I say that??...) The pockets will not hold M14, FAL, or HK-91 mags, though I suspect sewing the pouches for three pockets would do that nicely. Obviously, there's plenty of room in each pocket for M1 Garand en blocs, though they don't occupy the space optimally.

So, there's a weekend DIY project for ya'. Not a lot of moving parts and it can be done while catching your favorite "athletic entertainment programming" on the talkin' picture box.

TCM
Posted by TheCabinetMan at 10:30 2 comments: