Aim_Small_Miss_Small discusses a grand strategy to restore the Second Amendment of the Constitution to a fully-protected civil right:

. . . we must start and then move [non-committed antis] along gradually with the kinds of things they will find persuasive . . . we need to meet them (on the rhetorical and philosophical battleground) where they are instead of where we wish them to be.

I agree, but maybe we also need to look at other places where they already agree with us. Note the poll on the right sidebar of The Gun Blogs, where I found the post: which strategy should we RKBA types emphasize to what should the focus of gun rights activists consist of next? Expanding CCW, repealing "sporting purpose" language, et cetera. As you look at the poll results, you'll see there's not enough consensus for us RKBA proponents to concentrate and achieve one of them.

For example, many staunch gun rights activists argue that a national CCW would be a step backwards, because we'd be subordinating a right to a nationwide (read Federal) system of licensing.

Similarly, should we support BATF reform? Bullshit, some of us (including me) will shout back---shut it down instead. No good can come of it.

Between the poll and Aim's post, it occurred to me that we should explore other options that foster divisions, or just as good, doubt, among the antis instead of arguing over the divisions among us. Our options should not discuss guns openly either, because the antis will smell such tactics coming from far, far away and circle the wagons. Focus on collateral, apparently unrelated issues.

It will readily become clear to the gun rights activist that he or she ought to be fighting for other rights anyway, because the infringement of those other rights makes gun control that much easier---standing the old bromide "the Second Amendment is the right that guarantees the rest" on its head.

Well, there are three ideas, in matters where gun rights activists can expand the effectiveness of their efforts and divide the antis, without even having to utter the word "gun."
Posted by Fûz at 21:33 No comments:

Holding his nose cannot be enough

How can Glenn Beck stand to have to talk to Nancy Grace?

Let alone have to hear her voice?

It must be the magic of production, like how the Beatles could record an entire album with only one Beatle present in the studio at any one time. Ringo laid down the percussion, all else could be tweaked by engineers.
Posted by Fûz at 22:56 No comments: 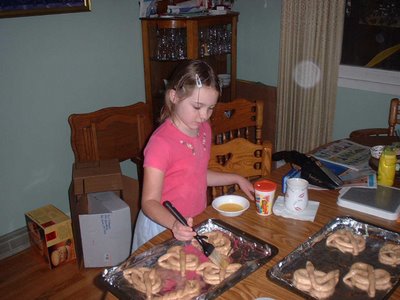 Mlle Sklodovska and I had the house to ourselves today. I scratched an itch---homemade pretzels.

Reminds me of this article that TCM pointed me to recently.
Posted by Fûz at 17:04 No comments:

You say you are worried about your kid getting run over? I dealt with that concern by taking [offspring unit] for a ride in the country and stopping by the side of the road to point out roadkill racoons, particularly three day old gas-bloated ones buzzing with flies. "This is what happens if you play in the street."