Two-tiered justice system, or a case of the rich raising the tide?

One: we have a two-tiered justice system. One tier serves the moneyed elite and delivers verdicts favorable to them, and the other handles the rest of us and dispenses justice to us in a way favorable to the State.

Other: the justice system we operate today commonly abuses defendants' rights and gets away with it. Only "celebrities" and the rich wield the resources---finances, name recognition, talented counsel---to fight back against them. If it weren't for them, fewer people would be aware of the abuses and they would be more widespread.

Of course neither view excludes the other.

What's your take? Put it in the comments.
Posted by Fûz at 20:34 No comments:

I actually watched one from start to finish, mainly because I knew Cathy Seipp would be there. It was worth the time.

A Cheerios ad running from local feed begged a hacking. More on that later too.
Posted by Fûz at 23:02 No comments:

Firstborn and I spotted this pair three weeks ago, along Colorado 86, between Castle Rock and Franktown. Since then I've kept a loaded Canon in the car. My patience paid off. Here they are again, last Thursday night, about a hundred meters east of Colorado 83, about a klick and a half from where we last saw them. 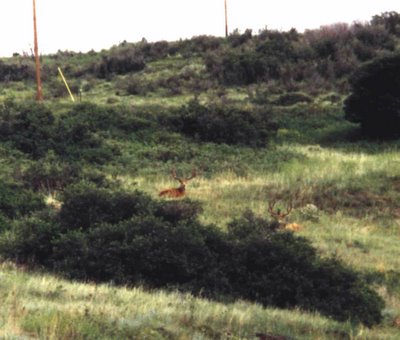 A friend at work says these are Boone and Crockett material. Both are at least 10-point, still in velvet.

Five of them were in the same spot this afternoon as I drove home. The camera sat at the house, empty.
Posted by Fûz at 21:11 No comments:

After perusing the table of contents for the August 04 issue of Liberty, and comparing the obituaries for Ronald Reagan, I'm impressed with the diversity of thought. I liked Reagan, both in political deeds and political words, with some exceptions as always. I'll tolerate and hear those who speak ill of him, even want him to go to Hell. But that's not my point.

Liberty's editors and writers are polarized on Reagan, as they often are on many topics. As I scan the titles of the articles and their alternating love him/hate hims, it appears to me that I need to keep track of the writers with whom I agree and disagree, and why.

The blogosphere is infested with self-selecting quizzes that invite a reader to answer a series of questions about himself, and then return a profile that matches the reader to a famous philosopher, politician, fantasy figure, humorous character, and so forth. I'm a True Neutral Half-elf Ranger Druid by one quiz, John Stuart Mill by another, Jimmy (of the movie Pulp Fiction) by another, Boomhauer by yet another.

If libertarianism is not a single unified
philosophy but a kind of constellation of neighboring, competing philosophies, able to attract each other until we get within 1 AU and then mildly repel each other, we should start pigeonholing ourselves into them (visualize the name tags that say "HELLO! I'm Fûz and I'm a Consequentialist Jeffersonian"). A Quizilla based on Liberty Magazine's editorial staff would serve well as the sorting hat.

That way we know what to expect when we bump into one another at cocktail parties and blogger roundups, get past the bickering after the first round of drinks, and build a consensus for useful political action. The ones who want to keep on arguing can be dismissed as wankers.

Which regular Liberty writer am I?

We should be seeing a perp walk, not hearing sniffles about "quee r timing"

Americans have a traditional and healthy distrust of government. This distrust demands openness in the government's operations, so political consensus can be achieved and the will of the governed can operate.

One lonely area where we allow the government to be "closed" as it were, is in the area of national security. We allow our government to hold certain kinds of information secret because broad knowledge of that information can put us, the governed, in danger. We allow secrets to be kept from the majority of us for our benefit. This trust is tenuous. The makers and
keepers of these secrets have a unique duty to understand and earn the trust that allows us to keep them in the first place. A violation of this trust can shake the government to its foundations.

We cannot afford any incidents that are or would reasonably be construed to be politically motivated manipulation of state secrets.

The former simply makes us shrug and wonder idly whether Mr Berger's security clearance will be merely suspended, or fully withdrawn for cause; the latter should outrage us, regardless of our political preferences, for undermining the trust we place in our government to maintain the firewall between domestic party politics and national security.

We should be seeing his perp walk instead of an impromptu press conference, and we should be hearing ringing condemnation from his former boss instead of suggestions of suspicious timing of a leak.

I readily admit that I view everything through ideological lenses. Some lenses wash out too much contrast, keeping me from seeing a difference that I either do not notice, or write off as a meaningless or even false distinction. After I begin missing too much, reality taps me on the shoulder and suggests that I try new lenses. It is not an option to remove the lenses entirely. No lenses, no filter, too much glare pours in.

Libertarianism has been my most trusted lens for perhaps fifteen years now. The prescription has needed adjustment from time to time, and now it seems that I need to do close-up work with one scrip, driving with another, so to speak. But it has done well for me, I haven't driven over a cliff or failed to heed a product's warnings or nutritional tables. The lens of libertarianism rarely leaves me feeling as if a large part of the real world is escaping my notice, nor that it shows me things that others dismiss as hallucination. It has withstood the tests of these 15 years. But it alone will not show me everything I need to see. I'm always open for others.

Im pleased to report that I've just found a new, very interesting lens and have not yet finished trying a pair and navigating with them. RKBA readers, stay with me, this isn't some maudlin fatherhood post. Gun content below.

I'm cheating by reading the closing chapter. It slices, it dices, it prognosticates:

But this lens is not without its, er, chromatic aberrations. Some of what the lens tells me I will see, I don't believe. I'll give it time to prove itself, as all prognostications require:

Most important to me as I examine this nifty new lens, is how the writers who crafted it appear to have no political axe to grind. Had they sounded even slightly lefty or righty, I would have dismissed this book and returned it to the library at once. I haven't seen any bias of that sort yet and I will be watching.

Any other folks who have read this work or related ones (several other books are dedicated to specific generations) please comment or email me.

Go congratulate Walter and the Mrs for their twins, born today.
Posted by Fûz at 21:37 No comments:

The April 04 issue of Liberty is especially good, now that I have gotten to it.

Stephen Cox's and William Merritt's reflections on homosexual marriage frame my position perfectly. I wish I could link to them here, but I can't. Yet.

There's also a great article on how New Urban neighborhood design is associated with significant (up to five-fold) increases in crime. I was going to try to work that into one of my interests, the reform of water-wasteful residential development in the parched West. I want to write about how my proposed redesigns would either repeat this disaster, or be modified to avert it. But I can't. Yet.

Why not? Liberty's web presence has been, in a word, unusable. Their site carries selected articles from their April issue, of course. April of 2001. I can't link to their articles because the articles are not uploaded. I had given up checking it to see whether they had resumed the web edition.

For a long time I suspected that they prioritized their web content so low that they didn't maintain it. This suspicion was fueled in part by Liberty's editiorial positions on music ripping and Microsoft Windows, which lean strongly towards preservation of intellectual property, condemnation of music piracy, and championing the absolute right of Bill Gates to set whatever license terms please him for the use of his software. Why put your content on an URL if someone could read it without paying and, horrors, even copy it? There have also been disparaging comments about those pesky webloggers (though the most interesting reading in the magazine, Reflections, reads like a group blog comparable to VC or The Corner).

If intellectual property protection was the reason they had chosen to publish only in print, it was a poor one. No periodical that wants to be important, wants to be cited, wants the reputation for unique and incisive reporting, chooses not to publish an online edition. It was probably the question of affording a webmaster who wouldn't crater them.

At any rate, I can put all that conjecture aside.
Huzzah! Liberty Magazine finally is overhauling their web presence. I've cited her articles there in the past and will do much more in the future now that they will have URLs. Hat tip: Jacob Levy at Volokh Conspiracy.

They're worth the dead-tree subscription too. Go for it, you know you want to. And tell them you've chosen to subscribe now because their content is now accessible online. Network effects and all that.

Why are you still here? Pick up the GD phone and subscribe!

In the CD changer:

* * * *
The Denver News Agency gave our household a complimentary Sunday Post yesterday (funny how they have the newspaper all planned out one day in advance, hard to call it news then, isn't it?) and it reminded me of how little indeed I miss reading a dead-tree newspaper. Scrolling through, er, paging through their Perspectives section and seeing a guest editorial promoting the scrapping of the Electoral College, plus eight or nine editorials about how primaries bring out the non-mainstream candidates, and I had had quite enough.

Barbaloot wants to do the crossword. That, I submit, an internet application cannot substitute.

* * * *
We capped the day with the last of the antelope from last year. It started out looking like this: 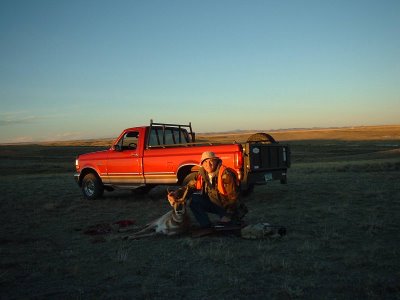 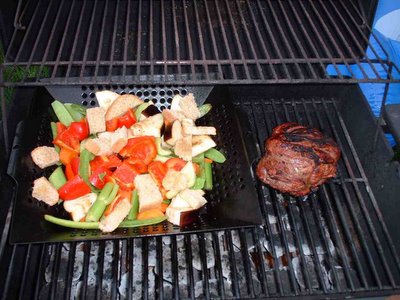 A roast marinated in Italian salad dressing, liquid mesquite smoke, and molasses. On the side, eggplant splashed with rice vinegar, snowpeas, carrots sprinkled with ground ginger, red pepper, celery, and sesame seeds. Grilled to medium rare over Strickland propane.
Posted by Fûz at 17:03 No comments: