not bad.  Now I need to download some Android app that can measure a photo of a shot group and pull out the group size.

This is a five-shot group at 60 yards.  Flyer lower left.  The rest of that ragged hole was cut by 4 bullets, not three.  The group was shot with no defined point to shoot at, just my attempt at "center of the paper plate" using a Vortex Crossfire II Scout set at 2.5 power. 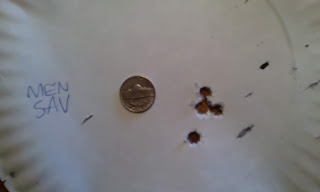 the tears in the paper plate are from spalls thrown from Grendel bullets hitting steel about 6 feet away, lower left.  Ignore them.  There's a story behind that steel I was pounding with Grendel but that story is for sometime telling in September.

Lest one think that there's another flyer hidden under the nickel, same plate with the nickel moved: 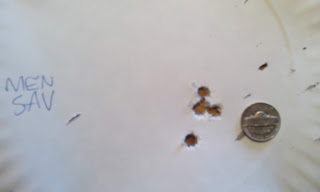