Not your 'nads, mate, but the US Military.

No, it isn't too small. WUTT! disagrees that we haven't enough men. We have just about enough to do the work, if we can deploy them all. For starters, the ratio of officers to enlisted is out of whack.

We're kicking some good enlisted men out because they've been at a particular grade for too long instead of getting promoted. There's nothing wrong with a Staff Sergeant remaining a Staff Sergeant for ten years, if he's a good Staff Sergeant. He may make a lousy Master Sergeant, but we'll always need some number of Staffs, and if this one's mission-capable and bought-and-paid-for, keep him. The same is happening, in tragic proportions, with stiffer formality, and at loss of a greater investment, among the commissioned ranks. Up or out at O-5.

The massive Guard and Reserve call-ups to support OEF, OIF, and upcoming O-star-Fs, are being cited as reason to add heads to the active military branches. Y'all have got that wrong. So many military skills such as public affairs, inflight refueling, military police, and theater airlift were given to Guard and Reserve elements on purpose, to make sure the public noticed, painfully (employers, stock markets, banks, churches), if a large-scale US military campaign ever launched.


Guess what: the public noticed. They looked long and hard at the justification for and cost of this war, and they chose to support it. Those who didn't support it found themselves in the minority, and public support ebbed away from them.

Transferring these missions back to the active branches undermines that balance, and muddles the signal of popular support, up or down, that a war needs. Note well, I say this at personal expense. Transferring these skills back to the actives would make it less likely I'd ever have to deploy again. My family would be happy with it. But I'm against it, for big-picture public-policy reasons.

WUTT!s editorial board are also not interested in a return of the draft. Ask any of our fine folks downrange today whether they would be comfortable showing the ropes or trusting their backs to young enlistees who didn't seek to be in uniform.

What we do need, however, is better training, in marksmanship to name one area, and more thorough exercises to galvanize that training, and more money to convoy or airlilft our forces to the RTSs, CRTCs, CTCs and so forth where the exercises can be conducted. Here is where we find out who deserves to be promoted from Staff to Tech to Master, who deserves to be kept as a Major, and who needs to get the hell out of Uncle Sugar's service. This is also where we find out where we can or must transition to specific COTS items, such as GPS receivers, boots, and other individual equipment.

(Added) Taking one step further back, let's have a real foreign-policy dialog about using our military as Meals-on-Wheels. Deployments to the republics that used to comprise Yugoslavia have arguably trained us for the pacification of Mesopotamia, but the optempo required to keep it manned at the same time as Southern and Northern Watches has driven many good servicemen out.

So no, we're confident that size is not the problem right now. Anyone with experience will assure you it's how you use what you've got, that counts.
Posted by Fûz at 22:07 No comments:

New Year's Eve haircut, need it or not 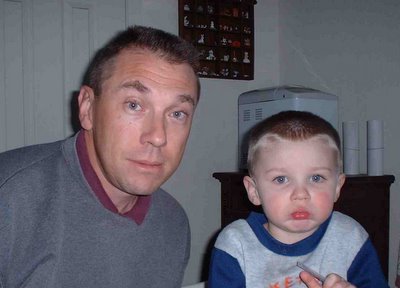 Boy's hair was getting a bit shaggy, and I needed some Daddy time, so I took him the whole way to Buckley's barbershop to get all of our ears lowered.

I hardly ever put a good photo of him here, it's time you get a good look. He's the one on your right. Ignore the ugly fellow with him.
Posted by Fûz at 16:18

Please visit RMBR II at Andrew Olmsted's place. My blogrollee Walterindenver started it.
Posted by Fûz at 23:26 No comments:

Why an almanac as a terrorist indicator?

It's not as srisible as NPR finds it to be. #BR_TAG


So all you folks who don't understand why DHS is interested in suspicious persons using almanacs, now you do, so you can now stop your tittering and pay serious attention.

My regular readers, all five of them, will tell you I'm no regular defender of nor apologist for DHS. However, their concern about almanacs, and their willingness to mention them in the clear, appear to me to be signs that they are in earnest search for something very specific.

BTW, the word almanac is a cognate from Arabic, isn't it?

Update: OK, perhaps it isn't an Arabic cognate. Of the three definitions cited by dictionary.com, one's etymology led to Greek and possibly further back to Coptic, one said "unknown" and a third offered no etymology at all. So I say "perhaps," and refuse to blink.
Posted by Fûz at 16:21 No comments: 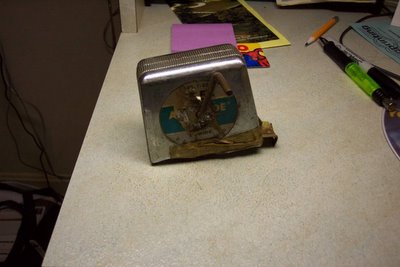 He regularly complained that steel tape measures were too easy to damage by retracting them at full speed. This steel tape measure must have been the proverbial straw; we found it when we went through his belongings after he died. I can see him cursing, then reaching for the tools.

He bent some brazing rod into a crank, drilled a hole, removed the broken spring and replaced it with the crank. It would have taken him as much time and forethought as it would for you or me to de-staple a document and feed it into a copier.
Posted by Fûz at 22:58

DenPost's lettitors once again discuss the problem of threading heavy recreational traffic from Front Range cities through a narrow mountain pass to the ski resorts.

There's not enough room through the passes for extra lanes, and one writer rightly concludes that if you build them, the traffic will increase to absorb the added capacity. Sinkholes in those stretches can close I-70 for days at a time. And at the times when the supply of snow is best, the road conditions can be at their worst.

A monorail will not be the answer either, especially if it's operated by the Denver public transit monopoly. The monorail will take up some of the space that extra road lanes would need. Sinkholes would still imperil a monorail, though snow probably would not.

The towns delicately perched along the route would also suffer if the highway is widened or a monorail is added to it.

All economic problems are put in terms of scarcity and how to manage or circumvent it. What is scarce in this case are surface routes from Front Range communities to the resorts.

We submit, then, a mode of transportation that doesn't need passes or tunnels through the mountains, and that does not need to strand huge costs (compared to rejiggering an Interstate highway) before it carries its first passenger.

This mode of transportation would generate some of its lift with a conventional wing, making it capable of payloads on the scale of seventy-five tons; it would offer the choice of transporting the passenger only, or the passenger with his or her vehicle and gear to further explore Colorado once they're on the other side of Route 9.

The extreme Green folks would love it because it burns less fuel per ton-knot than the privately-owned vehicles that are driven through that stretch today, it will be quieter and less disruptive than the surface autos, and it needs no large, wasteful asphalt runway---it can operate vertically. It could dock on Dillon Reservoir, whether it's full or empty, watery or frozen. At the other end, plenty of soccer complexes could accommodate the airship itself, the parking and the traffic.

The moderate Green folks would ride it just for the view on the observation deck.

Boeing and LockMart would love it because it's a new market for aircraft.

We'd like it because it offers somebody an opportunity to solve the problem without a government mucking it up. The people who are creating the traffic---the ski resorts---can solve the traffic problem and make themselves some money besides. Who loses?

Get some former Broncos in as financiers, along with the ski resorts, and they can operate sports bars and nightclubs aboard to entertain the passengers on their way up and back. They'd be cramped and noisy, but that's their purpose. Joining the Mile High Club will get a hell of a lot easier.

The only serious impediment to such a venture is not economic or technical, but political. The Transportation Security Administration will insist upon Dominating, Intimidating, and Controlling the ships, crews, passengers, ports, and cargo.

Blogging responds to even a modest increase in bandwidth

It's those little things that you see in the corner of your eye that distract you. Like this one:

[T]he average user", he says, "has little to hide, and so hides little". The other side of this equation is the effort demanded of the average user in order to use encryption properly. Even the simplest of the good encryption programs have a real learning curve.
...
PGP represents the other end of the spectrum. It's free, and quite secure, but you'll need to take the time to read the manual and understand it. You'll also need to convince others to take that time, too, or else you won't have anyone to send encrypted messages to.


It was just this evening that a married couple, good friends of ours and partners in The Cause, took dinner with us, as the airbreathing offspring units fell asleep to the Rocky and Bullwinkle DVD, while I explained how Pretty Good Privacy made their lives better, and made the life of a keynote speaker at an upcoming LP state convention tolerable.

It's not the hardware, it's the people using the hardware whom you must choose to trust. PGP's manual is explicit on this point, as it describes a Web of Trust.
Posted by Fûz at 00:07 No comments: