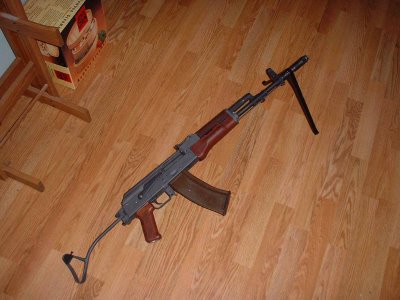 Nadia now has a cousin, built from a Wz88 "Tantal" kit bought from the good people of Gunthings. The receiver is vanilla Tapco, as are the trigger pack. She has a stack of Bulgarian brown 5.45mm magazines from Copes, equipped with domestic followers and floorplates offered by a fellow on one of the boards. Manson supplied the headspace gauges. Another guy on the boards supplied a domestic piston to take me over the Federal domestic content minimum.

After 3 ugly attempts to plug-weld the rails to the receiver, I gave up and ran to the nearest Harbor Freight for a proper spotwelder. Close-up photos would reveal the attempted plugs, so I won't show them to you. Sandblasting and some bench grinding cleaned them up as well as will ever be.

TCM's good results with Brownell's Teflon/Moly Oven Cure Finish, plus his offer of the remaining portion of his can, suggested that I give the same treatment to Jadwiga. While they were still disassembled, the rear sight base, receiver, receiver cover, bolt carrier, and folding rear stock all got a coat and were cured in a barbecue grille set carefully to the right temperature. The gas block and front sight base were treated with common barbecue paint. Final assembly created several dings in the finish, but she'll get a second coat after she's run in.

The bolt carrier meets some rough spots and won't spring closed every time, and the trigger pack needs proper retainers to hold the axis pins in place; the rubber bumper on the sidefolder needs a new rivet. But all can be tuned up right.

She's purty, I think, and she is the reason I got the jones to build a Kalashnikov. I understand now how the jones becomes a regular hobby.