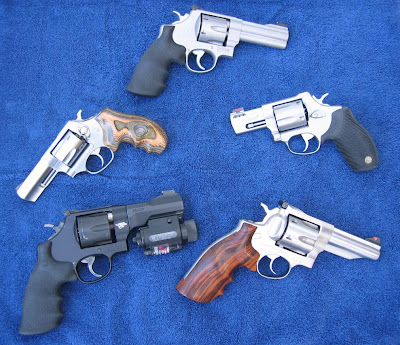 
I came to double-action revolvers late in life -- too late, if you ask me. My first handguns were a 6-1/2" Ruger Single Six and a 7-1/2" Ruger Super Blackhawk, both purchased NIB in my late-teens. Single-action: I knew what I was getting into and I could deal with that. I conceded to their "slowness" since my reason for owning them was to hunt the wiley wabbit and whatever big-game animal was stupid enough to blunder into Darwin range. (Which, given my skill level in those days, was probably under five yards...)

As my handgun tastes became "refined" in my 30s, I lusted after the 1911. These were the days before the internet -- remember those?? -- and I researched as much as I could given the resources I had. I plopped down $500 for a "standard-grade" Springfield Armory with no amenities and an awful trigger. But I loved it and I never looked back. Over time, the handgun quiver filled with Glocks and CZs and more 1911s. I had the original S/A worked on by a competent gunsmith and now it's a wonderfully reliable defense and IDPA piece. I even went to Gunsite and learned how to shoot the damned thing. I do OK.

But I'd never acquired a taste for the D/A wheelgun. Sure, somewhere along the way, I picked up a 3" SP-101 in 357 Mag, mostly because I was horribly over-paid at the time and prolly didn't know what else to do with all that extra $$$ I was bringing home. I fired a box of 125-grain 357 Mag HPs thru it, put it back in the safe, and spent two weeks regrowing the skin on the web of my hand. Not really a good noob experience.

Then over the years I stumbled across the writings of three folks whom I came to respect and admire: Tam, Marko, and Clint. All are serious wheelgun aficionados. And neither seemed handicapped by their choice of weapon. If they can do it, so can I. Time for TCM to reevaluate the D/A wheelgun.

I worked my way thru a series of 41 Magnums -- Taurus Tracker, Ruger Redhawk, and S&W Model 58 -- before I realized the limitations imposed by such a small pool of apologists and the resultantly small 41 Mag market. I (sadly) divested myself of the oddly chambered revolvers, but not until I'd garnered some measure of proficiency with the D/A wheelgun.

The first replacement was the new 4" Ruger Redhawk in 44 Mag. Nice gun. Built like a Merkava tank. But also heavy and sorta' bulky. The stock grip sucked so I put a Hogue on it. It gets fed one of three reloads I developed, handling each one with aplomb. The first is essentially a 44 Special "+P" load using a 240-grain SWC for 875 fps / 400 ft*lbs. It's an easy load to shoot all day long and very accurate. The second load is what I call my "working load", or "44 Mag Light". Again, using the 240-grain SWC but now doing 1100/650. Very nice! I figger' it's good for just about anything up to 400 pounds. The third load is my answer to bear spray: a gas-checked 310-grain flatnose at 1200/1000. Hurts like a muther to shoot but I imagine it'll work on everything I'd run into in the CONUS.

By this point, I'd seen revolvers at several IDPA matches and thought that'd be neato. I'd also been on the lookout for a good nightstand revolver; something that I didn't need to worry about rotating mags for or having grease dry up inside it, gumming-up the works. (In hindsight, the latter's not much of a concern since my "main shooters" aren't afforded long vacations from the range...) Then I stumbled upon the S&W 325 Thunder Ranch, which had the bonus of a detachable light rail. I already had an Insight laser/light that had been collecting dust so that seemed to be the way to go.

I managed to secure a copy for myself -- dayum, those things are spendy!! -- and proceeded to the range. O-M-G!! Where had this thing been all my life? What a nice piece: a wonderfully smooth trigger pull, great grips, and sights that live up to their advertising. I quickly went to work at the reloader and came up with three loads, all using a 255-grain SWCs: 800/350, 900/455, and 1000/560. The first load is my practice/IDPA load, the second is my "wave of zombies" load, and the last load for the off-chance I'm carrying the 325 in critter country. At one point I was drawing the 325 from the holster and doing D/A "double-taps", keeping 90% of 100+ rounds inside a 6" circle at 10 yards. And those moonclips recharge the revolver quickly!!

One of my favorite sayings is, "two is one and one is none". Not satisfied with just one 45 ACP revolver, I hunted down another one. That one was a S&W 625 Jerry Miculek model. Again, the stock grip sucked so I put on a Hogue that is identical to what the 325 wears. The JM has the same gold-dot front sight and the same to-die-for trigger action. The trigger itself is grooved -- which I don't care for -- so I filled it in with some silicon sealant. It too shoots great but, being all stainless, it is heavier than the 325. I can conceal it easy enough, though, and I even have a Blade Tech IWB that's quite tolerable.

[Side note: This seems like a decent place to mention a problem I found with my 45 ACP SWC reloads. Not an insurmountable one, but certainly a time-consuming one. Of the aforementioned wheelgun loads, I loaded 800 of the 800/350s and 600 of the 900/455. (Thank God for the Dillon 650XL...) I loaded all these before I got the 625; they were "tested for fit" in the 325. They worked great in the 325 but the first moonclip loaded into the 625 bound-up the cylinder at the recoil plate. Hmmmm...... I could get them to work if I mashed down on each cartridge with my thumb. Not really what you wanna' do in a gunfight!! So, on a whim, I grabbed a dozen or so rounds and re-seated the bullets down another 0.01". That did the trick. Somehow, the cutting band of the SWC was butting against the "headspace rim" (or whatever it's called) inside the 625's cylinders. I'd read somewhere that the 325 and 625 headspaced differently and that the 325 often wouldn't fire cartridges without the moonclips. Well, I had my proof. In order for all of my 45 ACP reloads to work in both revolvers, I needed to re-seat all of the bullets. All 1400 of them. I've finished the 800/350 loads -- a process which also involves removing a small ring of shaved lead from the crimp groove (a major PITA) -- but I still have the 900/455 loads to re-do. Meh...]

Which leads us to the Taurus Tracker M44C. This was an impulse buy and I got lucky. Like my old 41 Mag Tracker, it's a 5-shot. It will accept any speedloader designed for the Charter Arms 44 Bulldog, which is a nice feature. It has a 2-1/2" barrel, even though Taurus says it's a 2". It's been "crowned" nearly down to the ports so maybe that's why they're cheating their advertisers out of a 1/2-inch. Supposedly, Taurus only made a handful of these. (Maybe 250? I don't know...) The trigger isn't quite as nice as any of the other revolvers and the sights are fixed. The red "fiber-optic" front sight thingy works great in sunlight, though. POI is good horizontally but about 2" high at 10 yards. It digests very nicely both the low- and mid-range 44 Mag handloads I created for the Redhawk. With well-placed shots, I suspect either one would be pure poison against two-legged goblins. The stock grips are very comfy and I can't think of any reason to replace them. The M44C had some infant mortality issues which Taurus fixed at no cost to me. I'm awaiting holsters for it and I'll try my hand at CCWing with it.

And yet, there's something lacking in all this. What, you ask??

Simple: a 3", medium-frame, 5-shot 45 ACP revolver. Stainless steel cylinder and frame, maybe the latter in scandium. Fixed sights. (Driftable rear?) Moon clips, too, and good ones. Compact grip, but not too small.

All you revolver manufacturers pay attention. This could be done on a S&W L-frame or possibly Ruger's GP100 frame. I don't think an N-frame is necessary, given the low pressure of the 45 ACP and the fact that I'm thinking a 5-shot. The 5-shot cylinder is only a bit smaller in diameter than a 6-shot cylinder but the extra frame needed to hold it means more bulk and more weight. We're talking small and concealable. Why not take the S&W 396, stretch the barrel an inch and chamber it for 45 ACP?? Why not??

So, come on S&W, Ruger, and/or Taurus. Build it and they will come buy. Or at least I will.

TCM
Posted by TheCabinetMan at 14:00 7 comments:

I no longer have a use for any of these. There's a box somewhere for me to drop these off so perhaps they can be fitted to somebody else.

Now, the two pair of combat spectacles (upper left and lower right) are available to my readers, there's a third pair not shown. If you are OK with having lenses cut for them to your own prescription, email or comment to me. If I don't hear from anybody about them in about a month they're going on eBay. The frames are size 50-22.

The frameless ones, shown lower-middle, are for Army M-40. Tell me if you want 'em. There's a second pair not shown. The hoops to mount them in the M-40 are trashed.
Posted by Fûz at 18:40 3 comments:

A challenge to Radley Balko and John Lott

If dynamic entries are like cockroaches, there are hundreds more that Radley Balko is not aware of, for each one he has reported on. Even he suspects the same.

But that ratio of unknown to known is troubling. Just how many are there? Do they rise to the point that the average Joe is more likely to suffer a dynamic entry than, say, be struck by lightning or die in a plane crash?

What really are the odds that you will have your doors burst open by the cops?

This has a real-world practical aspect to it. Are you more likely to have your home invaded by real home-invading criminals, or by police executing a warrant, legit or not?

What increases the odds? Gun owner, CCW holder, income bracket, dog owner? Assuming that one is already leading a lawful life, what reasonable and lawful means can one take to decrease the odds?

Unfortunately, this is the sort of information our servants in government would rather we not know nor find out. So it will take some teasing and some statistical skill, neither of which I possess. But between Rad and Lott, a one-order-of-magnitude first pass should be possible.

Meanwhile there should be a Federal civil-rights nexus, and a police funding nexus, that Constitutionally empower the Feds to require all States to collect the statistics so we no longer must guess.
Posted by Fûz at 11:55 No comments: