Anduril
is a Remington Model 600 Mohawk, in .308 Winchester. 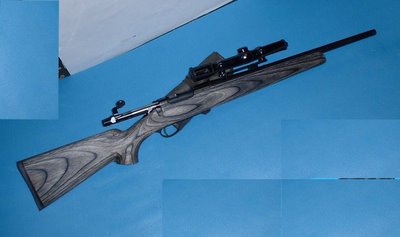 It wears a black-and-white laminate stock from an outfit in Los Angeles, an aluminum trigger guard from the former Numrich, a Burris ScoutScope base, and Burris two-and-three-quarter X ScoutScope. The mount looks a tad high for a gen-yoo-wine Scout Scope.

We sneaked away last night to a campground I've been meaning to stay at since I found it last October, while looking for a place to shoot with a bud from Colo Spgs.

Happy Meadows Campground consists of about 10 campsites nestled in a sort of hogsback, right along the Middle Fork of the South Platte River. Most campers come there to fish, and half of the sites are right on the banks of the Platte. Slip through some tall grass and step into the water.

Here's Middlechild and Firstborn on the banks: 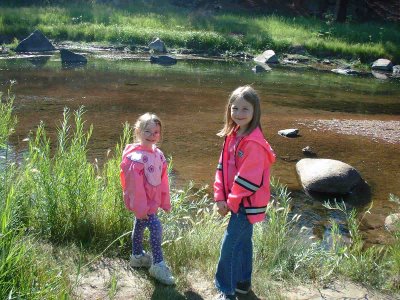 At least two of the campers there had hummingbird feeders out, right on the picnic tables, and hummingbirds were veering in and out, availing themselves of the feast.

I did not realize how fearless hummingbirds are. I almost had to pick one out of my eye at breakfast this morning. Nor did I realize how loud they are; they woke us up this morning with a chatter like that of crickets.
Posted by Fûz at 16:57