Reward builders rather than traders

" . . . we need to scrap shareholder value theory entirely. When it expires, so will stock-based compensation, and in due course, we will get back to rewarding builders more than traders."

Undermining staying power: The role of unhelpful management theories
Posted by Fûz at 21:32 No comments:

Labels: Quote for the day

Eulogy for an old friend

We first met in August, 24 years ago. I was fresh and optimistic; it was stoic and business-like. Yet we needed each other. $202.56 was a princely sum at the time, with me being a starving student and all. But school -- real school this time -- started in a couple weeks and I needed reliability that three generations of Texas Instruments hadn't given me. As I'm wont to do in the case of an expensive decision, I hemmed-n-hawed, made a few phone calls asking for advice, and, finally, capitulated to what I knew was the right decision. On August 16th, 1985, a shiny-new Hewlett Packard 41CV Scientific Calculator came home with me. 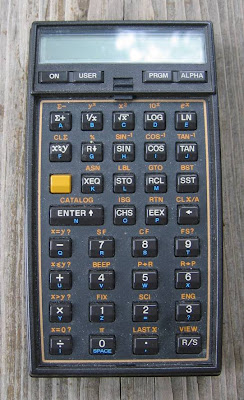 If memory serves, most, if not all, HP calculators of that era used Reverse Polish Notation. RPN was touted as being more efficient for the entry of long, complex formulas, especially when intermediate results where necessary elsewhere in the equation. Back in my Salad Days, though, I hadn't a clue how that would be helpful. I also didn't have a clue how to do RPN. Having been brought up using algebraic calculators, it was more than a few days before the lightbulb came on. That's because what had to happen first was to develop an understanding of what a "stack" was. Upon diving into the user's manual, I learned that the 41CV had a stack that was four entries deep. Huh?? Further research was in order.

Turns out a stack was an "automatic" way to store succesive data entries. Unlike many new terms I would become familiar with, "stack" was actually rather descriptive. Think of it as a spring-loaded cafeteria plate storage unit. As plates are added to the stack, the spring "automatically" reacts to the additional weight, dropping down a bit and keeping the new plates (roughly) at the same level as the previous plates. When a plate is removed from the top, the spring, now slightly less burdened, pushes the remaining plates upward for the next person to remove. In technical terms, this is known as a LIFO structure: last-in, first-out. It's embarrassing to say, but it took a while for this concept to sink in as it related to a calculator. But it did. And when it did, understanding RPN came quickly thereafter.

And it was beautiful!

I quickly became an RPN junkie. An RPN elitist. An RPN whore. And the 41CV was my enabler. To this day, I find algebraic calculators to be clumsy and, excuse me for saying so, proletarian. But the RPN wasn't the only thing contributing to my bigotry. The 41CV had it all, it seemed. Tactile keys. 100 memory locations. A (semi-)intuitive programming language. A plug-in module that contained programs for curve fitting, root finding, and basic matrix manipulations. And it was built like a Merkava tank. Unlike the disappointing TI-55s of my past, this thing Got It Done. Again and again and again. I was in calculator heaven! Newer and shinier HPs came along with their fancy graphics and overkill 32K memory, but I wasn't tempted in the slightest. Being the Luddite that I am, I figured that if the 41CV couldn't do, it probably wasn't worth doing.

We stuck together like glue. Tucked safely in its own ALICE pack pocket, the CV was dragged from class to class and braved year-round motorcycle commuting, exposed to the gamut of Maryland weather conditions. Rarely did a day go by that world-changing calculations didn't take place. From the mundane square-root-of-two, to the multi-term Practical Operational Amplifier formula, we did it all. Complex variable manipulations, crude Runge-Kutta-based projectile trajectories, multi-joint truss stress matrices, and countless "final numerical results" for everything from simple integrals to PID controllers to mind-boggling State Space systems. For five years of undergraduate electrical engineering classes, two years of half-hearted -- and incomplete -- graduate degree studies, and nearly 20 years of paid, on-the-job work, it stayed with me, a trustworthy, reliable assistant.

But about a year ago, things started to change in the CV. Unexplained shut-downs in mid-equation. Refusal to turn on. Intermittent lock-ups. One time I extracted the CV from its case and it was hot. And I mean hot! I had used it about an hour earlier and had shut it off faithfully as I'd done thousands of times before. But it wouldn't turn on. In a panic, I pulled the battery pack and let things cool for a bit. I cleaned up the (already clean) battery contacts, reinserted the pack, and it resurrected itself. But that moment was a turning point, for it was never the same afterwards. Reliability was sketchy. Battery life dropped to nil. New batteries that had easily lasted a year or more before were now lasting but two weeks. Finally, fresh batteries weren't enough. We crunched our last numbers together sometime back in November. I'm sure it was a simple muzzle energy calculation; I wish I could remember exactly. Since then, it's been sitting in the top drawer of my desk, looking no different than any other time in its life. But it is dead. If calculators have souls, I hope the CV's has gone to a place worthy of its contributions. It certainly earned it.

I recently replaced the CV with a newer HP calculator: a 35s. 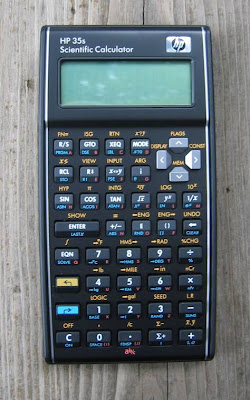 So far, it's been fine. The keypad layout is different but my fingers are learning to trace the new patterns on their own. The keys have the familiar tactile feel and it is, needless to say, RPN. I'll begrudgingly admit that I like the two-line display. I helps me remember what's in the second spot on the the stack, aka, the Y-register. The temporary memory structure is (strangely) alpha-based, not numeric-based like the CV. Additional memory is available thru indirect addressing, which I'll have to experiment with. But it lacks the reassuring heft of the 41CV and the jury's still out on the pixelated display.

I don't know yet if the 35s has a soul or not. I don't feel especially enamored with it like I did the day I first brought home the 41CV, and every day thereafter. The 35s is perfectly functional and I suppose it will serve me well. But I doubt very seriously that the challenges we face in the future will bring us together in the same way the past did with the CV41 and me. Perhaps it's not so much the thing itself as it is the shared experiences.

The Cabinet Man
Posted by TheCabinetMan at 11:01 3 comments: