I'd say there were 300 people in Cheyenne today in front of the Capitol. 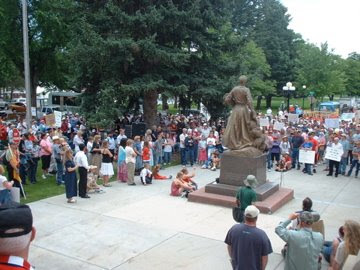 Many of the Usual Suspects attended. 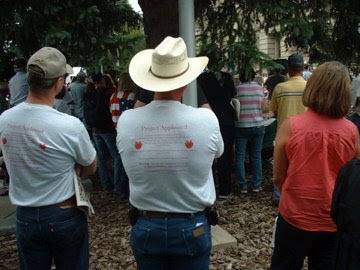 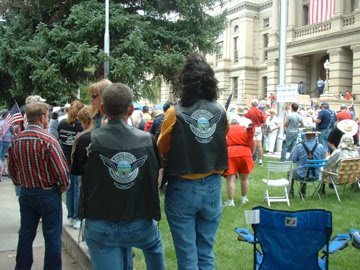 The Tyranny Response Teams are still around. 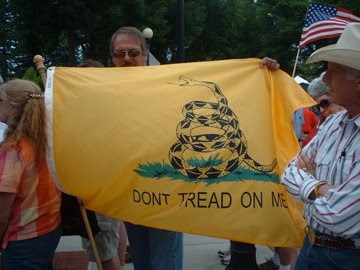 The was a speaker for Oathkeepers. Another speaker is a regular morning talk host here, Dave Chaffin.

In all, this TEA Party had a core message and kept hammering on it: the lack of meaningful Tenth Amendment protection. Kudos to the organizers, Cowboy TEA Party. Lisa Ray has been out in front with this effort, especially on the air.

Downside: there are some folks circulating a petition to form a Tea Party, as in political party. I think that's a mistake. The TEA Party organizers take pains to point out that the organizers of the political party are not connected to the TEA Party, and they're pissed about it.

I saw little of the mainstream media at this event. There were certainly some pros with heavy cameras, but I didn't see any credentials or brands on them. No TV coverage I could see, and this market has at least one station with an ENG vehicle up to the task. Their front webpage shows zip about the TEA Party.
Posted by Fûz at 14:20 No comments:

Surely he considers himself an educated man

The damnable serial past participle. Could he not have recast that sentence?

"could have been promoted on the basis of the results of": clumsy, I'll admit, with daisy-chained prepositions.

"could have been promoted on the results of": is ecoomical and leaves little doubt of the meaning.

It's vexing. Soon enough this construction will be accepted usage.
Posted by Fûz at 19:10 No comments: