This blog is in urgent need of jpegs, mpegs or written procedures of the MOPP Dance.

My good friend Daredevil looked me up recently. He's still in the tech industry, living in the Bay Area, and business brought him to Westminster. He called me up to take dinner.

Daredevil and I used to teach seminars together. I was Lewis to his Martin, Martin to his Rowan, Madden to his Gifford, Satchel to his Paige, you get the picture. A room of twenty or so people would sit in a meeting room at a Courtyard by Marriott, or a Doubletree, or whatnot, for three solid days listening to us describe how IEEE 802.7 broadband local area networks operated, or how to shove an entire band of cable TV signals down a wavelength of a singlemode fiber. And they paid for the opportunity.

His girlfriend at the time was becoming jealous of me, we spent so much time together. But hey, no wiry blonde in dire need of having her meds adjusted can compete with golf in Palm Springs on Super Bowl Sunday (it was a ghost town), for example, or golf in Orange, Connecticut on an autumn evening, or freezing our asses off in Hartford, or blackpowder hunting for deer, or a tour of Johnson Space Center, or dropping dollars in the gentlemen's clubs of Houston, Baltimore, Denver, the LAX vicinity, Hartford, et cetera.

We eventually were bitten by the sales engineering bug, and sought positions over there, in the early Nineties. He relocated to take a position with a business unit in Fremont, I stayed in Pennsylvania, and we hardly saw each other. As business those days took off, he followed his career to other companies in the area, and I eventually did too. But we stayed in touch, some times better than at others.

Since telecom started sucking, we've both been battered around, but he's sticking it out in the industry while I've practically forsaken it for Guard-bumming.

Thanks for dinner, Daredevil, and may business bring you to the Front Range again soon.
Posted by Fûz at 21:46 No comments:

The meat grinder has arrived, and it's built like a Massey-Harris tractor, in the Czech Republic. The obligatory multi-Euro-lingual packaging announces that Germans call this machine a fleischhacker.

The temping job is going very well, and will carry our house well into the new year, after Tadpole is born. I'm now steeping in the culture of Air Force Space Command.

We launched a new blog, targeted towards my AF community, hoping it will catch on so I can unsubscribe from several military email distribution lists. So posting here has been light and may remain so until:

is an Argentine Sistema Colt pistol, a licensed copy of the M1911A1 manufactured for their Policia Maritima. I ordered her when a lot were being imported at about $250 each.

She was rusted up, loose, and wobbly. Off I took her to the pistolsmith for cleaning up. 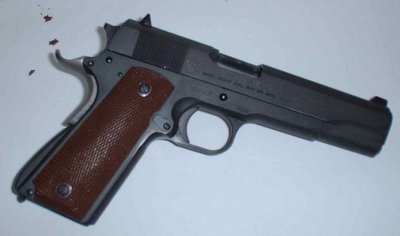 Most of the pistol is the original, except for the springs, the extended safety, beavertail, sights and barrel bushing. The ejection port was relieved and lowered, the hammer bobbed, the barrel link replaced with a longer one that tightens the lockup of barrel to slide. The trigger is lighter. It's beadblasted and Parkerized. It was my carry arm while licensed in Pennsylvania, and before I adopted Biter.

Here's a close-up of the rollmarkings, highlit with discarded loud-yellow nail polish. 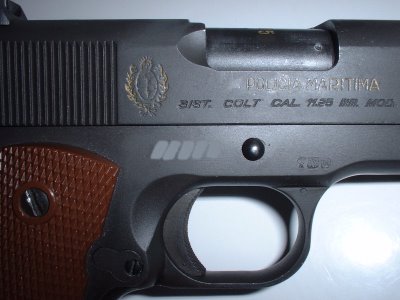