The New Orleans of the Atlantic

The Real Sam Johnson Show reminds me: Savannah, Georgia impresses me as the New Orleans of the Atlantic. And how the Atlantic needs one.

I'll be going there again soon.
Posted by Fûz at 20:35 No comments:


Abstract: the fastest way to ensure that high-speed wireless Internet connectivity is deployed to every possible inhabited place in the United States is to chase it into the shadows through the power of US law. The author draws parallels between the the War on Drugs, the War on Guns, and alcohol Prohibition on the one hand, and the availability of high-speed wireless Internet connections on the other.


Making alcohol, abuse drugs, and certain types of firearms illegal encouraged criminal entrepreneurs to ramp up supply to meet suppressed demand. In fact, milieus presumably under total control by government, such as prisons, are incapable of eradicating such "contraband."


A comparable approach, resulting from heavy lobbying by industries who perceive threats to their business model from digital reproducibility of their content, would incentivize a cottage industry of hackers and geeks to circumvent these legal controls, thereby making bandwidth more available, more reliable, more anonymous, and more resilient to malicious code attacks.


However, if the entertainment industry succeeds in enacting laws that will mandate the inclusion of digital rights management in the existing IP network, for example, there will be ample incentive for industries or activities to move their IP-dependent applications to a network that does not obey those laws. The technology exists, or the precursors to that technology exist, and only await the incentive to be assembled and applied. The demand, today legitimate and above board, will be forced underground. An active community of politicized engineers and technologists already exists to serve them.


The greatest technological obstacle would be replacement of the long-haul high-speed connections provided by such carriers as Level3, Qwest, and Worldcom.


For more, beg and plead for it in Comments.

Not quite there yet

I'm waiting for the market to roll out a PDA/computer hybrid:


For respectable desktop performance, it would farm out the functions of full-power CPU, graphics processor, and vast amounts of memory to the cradle, and run from on-board equivalents only when portable. Separate OSs?

It seems that all of the components are there, only waiting for integration.

At least one company is pursuing it, I don't recall the name (OXO?), but they are, of course, basing theirs on Windows.

Who else is close? One of the reasons I went for the iRiver MP3 player is that it could be the progenitor of such a desktop/PDA killer. It is principally, by weight at least, a hard drive. The desktop/PDA killer will be, mostly, a hard drive, with enough application hardware and an OS wrapped around it to support PDA functions, using information written to that drive. Putting a Palm front-end on this drive will do that, if Palm can be made to access hard drives. The whole Palm front-end can go inert when the device is docked.

When the killer is booted in its cradle, the CPU there strokes the hard drive and accesses everything that the Palm OS has put there.

Other devices will be coming towards the killer from other directions. For example, Tapwave's Zodiac is a game console. Put a HD in it?

WTF for the day

At the Commissary, right up front near the entrance, there was a rack of the current generation of MREs for sale. For about $7, IIRC, marked down from the usual $9.

There's nothing wrong with them, I've lived on them and was able to transition back to real food successfully afterward. Some of them I even like---the pork rib, for example, and the clam chowder.

But I wouldn't actually buy them. Through the normal course of my service, I accumulate enough of them for my other needs, like the car trunk and the occasional hunting trip, even the overnight bag if I'm on a weird commercial airline flight. But somebody out there thinks they're great long-term survival food and they want to buy and hold them against Doomsday? Not at seven bucks a meal.

The real punchline, though: they're for sale, to any qualified Commissary customer, though every package is marked in Uncle Sugar's standard all-caps boldface,

Bee in My Bonnet

Hello all! Well, just like jumping into a cold pool is best done all at once and quickly... here goes my dive into blogging!

I usually listen to Christian radio while on the job as Mom the Chauffeur. Last week for some reason I tuned into conservative talk radio. Dennis Prager (http://www.dennisprager.com/) was interviewing a gentleman about Liberals - why they act as they do and why they won't change. Maybe this is old news to you, but for me it finally lit a light bulb. The point being made was that for Liberals equality was the overriding priority. Equality is more important to Liberals than morality or freedom or responsibility or anything else. It is their overriding concern.

I asked myself how the world would look though equality colored glasses.

One example: parents versus children. For there to be equality children need to have the same power as parents. And so we have children suing parents and parents afraid to discipline their children when they misbehave in public. Children are smart enough to use their parents hesitation to their own advantage. Parents are responsible for forming morality and decision making in their children and discipline is one of the tools. Oh, but I forgot. That would only be important if morality and decision making had a higher priority than equality.

And what about jobs? In my lifetime I have already seem equality erode job standards. When women wanted to become firemen, they had to lower the standards so the women could qualify for the positions. Now don't get me wrong. I'm all for women being firemen. I think it's great. But I also think they need to meet the same standards as the men for our safety and theirs! Those standards were not plucked out of thin air. If you want the job then work for it and EARN it!

Life is not supposed to be fair and I'd Like to know who started the rumor that it was!
Posted by Barbaloot at 13:49 No comments:

At 1320 hours Mountain, I felled a pronghorn on Foote Creek Rim, west of McFadden, Wyoming. 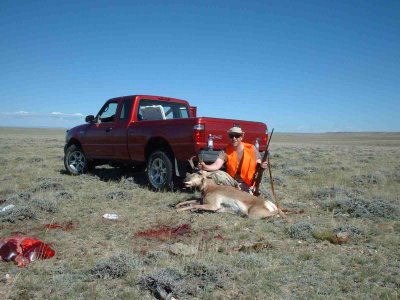 This is what leave is for.

He was struck through the sternum. The projo was not recovered.