The TIS-1 man-portable military laser is an interesting concept: a reservoir of helium, heated by radioactive decay, releases its helium through a vortex tube into a resonant cavity. The vortex created by the flow of helium causes a population inversion among the helium atoms, which in turn stimulates the release of photons of a common wavelength. With enough helium atoms flowing, you get enough energy resonating in the cavity to emit through one end and damage something.

When the helium flow peters out, the laser shuts down. You have to cool and recompress the helium, then reheat it, to get another blast.

It has its limitations, in that your soldiers will be humping the ruck with compressed gas tanks full of dangerous alpha emitters, and sizeable radiators that will disclose their locations to thermal imagers. There might also be a tactically intolerable delay before a discharged weapon recharges for another blast.

Regular readers of WUTT! will recall that all things weapon-y are appreciated as Things of Beauty here, but sometimes we must consider gathering stones together instead of casting them away.

We also assert that our future is in space, and we have to develop economically feasible ways to explore, exploit, and populate it. Getting out of the atmosphere is one problem to solve, moving about efficiently among the planets is another. With capitalist solutions to the first problem within our grasp, let us turn our attention to the second. We need flight times to Mars and the Asteroid belt on the order of weeks rather than months. I am told the principal means to do that is to separate the problems of power production on the one hand, and generation of thrust on the other. You'll need less thrust if you use only enough to propel your payload, rather than propel your payload plus the power plant itself. Offload the power production and achieve economies of scale with it. Send that power to ships that need only enough to push the payload.

Make the vortex tube very big, and make a few hundred of them. Mount them on pan-tilt heads slaved to an aiming system. Connect their exhausts to a large radiator to eliminate the remaining heat. The radiators could be located at the Moon's poles or mounted at the bottom of deep narrow trenches to minimize sunlight striking them.

Build the ships to be propelled not by the impingement of photons upon their sails, but by ion motors. The sails will carry large arrays of antennas to collect the microwaves from these lasers and convert them to electricity to power the ion motors.

With a large enough reservoir of masing gas, and a large enough network of radiators and compressors, it may be possible to aim multiple masers continuously at a flight of ships, providing them with constant thrust for days or even weeks, until they are out of range. It will also be possible to beam power to ships that are approaching, to help them decelerate as they reach their destination instead of relying on the nerve-wracking technique of aerobraking. The power to create the thrust will be completely unrelated to the direction of the thrust.

There are always details to be worked out. Will the ion propulsion exhaust reflect or diffract the incoming microwave beam to the extent that range or power is impaired? Will the flow of hundreds of tons of gas through the gasdynamic maser system set up vibrations that make aiming impossible, either for a Lunar platform or a Martian-orbiting one? Will the vortex tube or the cavity wear out? How much of this system can be built from Lunar materials, or will it all have to be boosted to orbit? Can this system be used to loft an X-prize type vehicle the rest of the way to orbit, or will even that thin upper atmosphere attenuate and spread the beam too much?

Update: The massive gasdynamic maser will also come in handy for dealing with these pesky Earth-crossing roids.
Posted by Fûz at 13:41 No comments:

We can neither confirm nor deny . . .

. . . that we may now or in the future have received our Colorado CCW, in accordance with Colorado's Revised Statutes section 18-12-201 et seq.

If we have or are about to, it will have been or will be among the low three-hundreds of those issued this year in Douglas County. That puts the per-capita of CCWs for Douglas County rather low, a totally wild-assed guess of .4 percent of total population, as Blog O'Stuff has observed (Hat tip to Renaissance man James Rummel).

The duration of such a CCW permit is five years from date of issue. The application-to-approval process can have taken 60-plus days. The permit itself is prepared on the day that that the application is submitted, and the fingerprints and photograph taken, thus it is technically "issued" on that day, but the you the applicant cannot take possession of it until the approval grinds around and you get your phone call from the Sheriff's office inviting you to come pick it up.

So the useful "life" of the permit is five years minus about 60 days. I couldn't find anything about that in the relevant CRS so I won't cry foul. Note also that the hours when applications are accepted are rather circumscribed. But overall, DCSO does not screw with applicants.
Posted by Fûz at 22:17 No comments:

Why the LP should abandon Presidential campaigns

Hat tip to Jed at FreedomSight.
Posted by Fûz at 21:59 No comments:

Toad, Barbaloot and I are holed up in Children's Hospital, getting Toad his palatoplasty and two tympanotomies. All went well, though Toad looks like he went through a round with Tyson, then a tequila hangover. 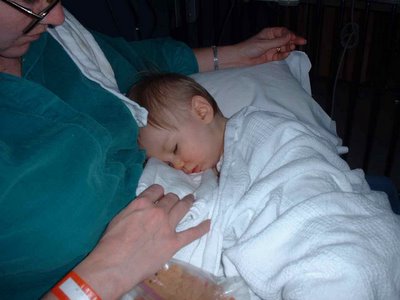 Much catching up to do. I have Days Off so it's worthwhile for all seven of my regular readers to start checking in again.
Posted by Fûz at 20:27 No comments:

New post on Social Security privatization over here.
Posted by Fûz at 14:49 No comments: