Comcast has the franchise for this area. Comcast used to be AT&T Broadband, who used to be TCI. The cable network here is finally getting upgraded to the point that it will carry digital cable (the reverse path is turned up and aligned so modem upstream signals can get from my house to the headend) so DOCSIS should be supported here any week now.

But I have used Earthlink since 1997. I like it. Barbaloot likes it. I've logged in to it with local numbers in every state I've been to, and one foreign country. I'll need local dialup for travel, in addition to a high-speed connection at home, for the foreseeable future.

I want Earthlink to continue to be my ISP, and I want to reach Earthlink through a cable modem.

Can you two arrange a stock swap or something? Jeebus.
Posted by Fûz at 20:51 No comments:

The replacement cooling fan for the video processor arrived promptly (thanks again, Kirk), but I waited to see whether the existing one would become noisy again, since I had flossed some graphite into it. It obliged, about a week later. The grinding resumed without any of the graphite appearing to have been slung around inside the case.

I verified that it was indeed the video card's fan that was noising up again, by opening the case with the G4 still running. Yup, that's the one. OK, button her back up, and . . .

I took a quick look at the back connections, and noticed through the grille that the power supply's fan was not turning. This is the fan I replaced earlier in this educational troubleshooting process.

Hmm. Is it controlled by a thermostat? I shut down and dismantled the case to get the supply out. There's a component on the power supply's circuit board that looks like a big thermistor, and it's in a spot right in front of the fan, and a label on the board said this component was "TH1". Strange, though, I've never seen that fan not spinning. I've never heard it suddenly kick a new fan noise on, nor turn one off, as if any thermostat were controlling the fan.

I took the fan out and ran it with the 12V supply from a Zip drive. It spun.

Then I looked at the modular plug where it takes its power from the circuit board. The socket that receives this plug pokes its two contacts through to lands on the solder side of the board. A tiewrap and two screws were all that held the board in place in its box.

First, do no harm, physicians are warned. Don't make something worse while trying to treat it. When I replaced this fan (without troubling myself to be sure this was the source of the noise), I spliced the plug from the old fan on this one. When seating the plug in the PCB socket, it pushed the leads of the socket through the PCB, and broke the circuit traces on the solder side. No juice to fan, fan no spin. You can see shadows cast by the pads of the circuit traces, dead center of the photo. They're about a millimeter up from the board surface. 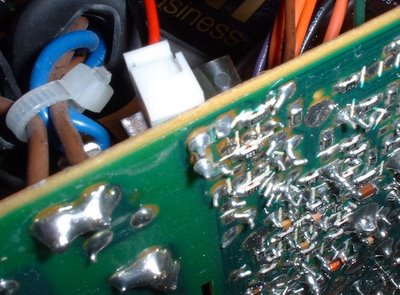 The basement is chilly, and we had been running this G4 only for short spells, instead of its usual 24/7, since cleaning out the video chip cooler, so the power supply probably hadn't been at risk of destruction. But this situation could not go on.

I found two suppliers of replacement supplies, one different from the other by a thirty-dollar core charge. Still, at those prices let's try to fix the existing supply.

This is when I remembered that the only soldering iron in the house is a butane-powered underperformer. The USAF taught me how to run a soldering iron, giving me my start in 'lectronics, and how do I preserve this essential skill?

I left the G4 in parts, and stopped in to the Computer Store With Real Geek Girls on my way home from work the next day. A twenty-five watt iron, solder, wick, (iron under capital expenditures) and away we go. Different set of Real Geek Girls too, BTW.

Plan A, an attempt to solder the socket back to some traces on the PCB. Still no juice to the fan. One contact of the socket was too far down into the socket to make contact with the fan's plug. Any more work on this board and I'll be burning a hole through it, and setting off the smoke alarms.

Plan B, restore the original plug-and-socket combination originally supplied with the replacement fan (clever how they do that---both a male and a female 4-pin, that will jack into the power supply harness in parallel with a HD inside). There was enough slack to run the fan's leads out of the case and jack them in with the DVD-ROM up high in the case.

Success. G4 is back to 24/7 operation, all the fans spin. Next project: how to upgrade the Linux box for faster mobo and CPU.
Posted by Fûz at 20:51

Several people warned me that antelope meat, especially that harvested on open prairie, will taste strongly of sage, so much that the locals prefer going after elk. To them, antelope are practically as easy and plentiful as rabbits, neither a challenge nor a good meal. It was an exciting hunt for me, and I'm not readily jaded.

Still I was concerned that I would be the only person chez Fûz who would be at all interested in eating this precious lean meat. My experience with kangaroo was non-peak.

I thawed and marinated a short piece of backstrap in Buffalo's finest, Chiavetta's barbecue marinade, a case of which Barbaloot determinedly ordered through the local King Sooper's. 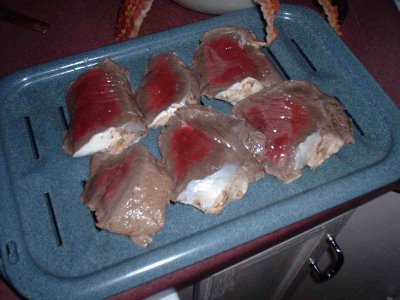 Middlechild is our resident master carnivore, and Pronounced It Good. Put yourself in my place, see what I've seen. A five-year-old girl turns her blue eyes to you, still chewing, saying "more antelope, please."

I am working up the courage to cook this meat without marinade, just laying bacon over it. The meat is tender, sweet, barely a hint of the smells of the prairie where it fed.

A meat grinder is enroute also, that we may try our hand at chorizo and sweet Italian sausage. Sheep casing surely can be found hereabouts.
Posted by Fûz at 19:38