It's The Cabinet Man again. Long time no post.

We gun nuts are so often accused of being mono-topic drolls, incapable of interests outside of rolling naked in piles freshly reloaded ammunition. But just like most folks, we actually enjoy other pursuits at times. For me, well, I'm a bicycle freak. I yoosta be a USCF flunky and had grand aspirations for racing the RAAM. I once competed in the Eagleman (Half-)Ironman Triathlon as the bicycle leg of a team. My greatest bragging rights, though, lie in my completion of the 4400-mile TransAm Trail that runs from Virginia to Oregon. I rode that solo -- and unsupported -- in 1998. While my ambitions are far tamer than they were a decade ago, I still enjoy throwing a leg over the top tube and grinding out the miles.

(And I'm not the only bicycling gun-nut. Tam and Xavier are two more examples...)

Fair question. It'd be easy to say that we're tree-hugging Earth First'ers that want to save the planet and be a good example to Gaia-loving bipeds everywhere. Or that we like making Arab oil shieks pissy! But that'd be 180-proof blatherskype. (Well, maybe there's some truth to that last one...)

In all honesty, we just like riding our bicycles. And we have a couple of them: 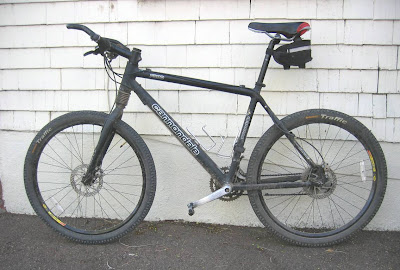 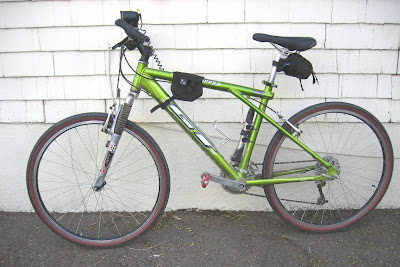 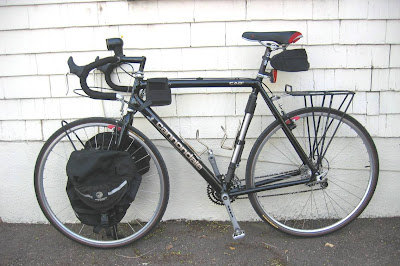 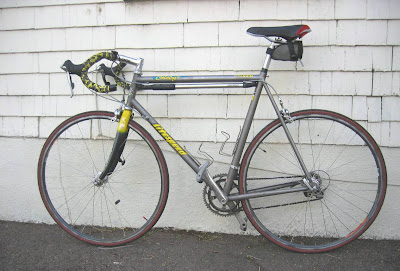 (Yes, that's a titanium Litespeed you're drooling over, blessings and praises be upon it...)

I recently picked up the TerraTrike Tour (TTT) tadpole recumbent for me: 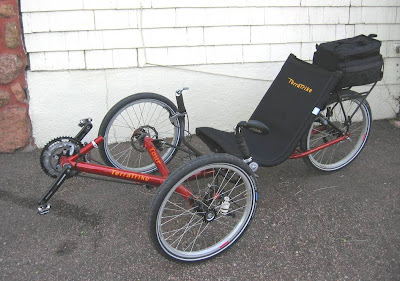 and a BOB trailer off Craig's List for the Missus: 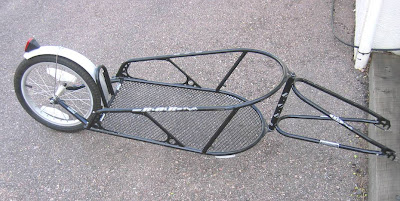 (I have an old Rev 1.0 BOB for myself. The Missus doesn't wanna' haul all the groceries...)

So with all that, we wanna' ride!

We plan to use this car-free month as a springboard for developing better ride-to-____ habits. Just as importantly, we're hoping the commitment will result in more pedal time and less waistline. I need to shed about three stones and the last time I decisively lost tonnage was when I was riding religiously for 10+ hours a week. (20+ hours, actually, but we gotta' start some where...)

I'll probably split my time between the TTT and my beloved Cannondale T2000, the latter being my trusty TransAm steed. The TTT is a blast to ride and the very definition of comfortable. It's an imperfect solution, though. It's so low to the ground that I get the wiggins in heavy traffic. It climbs a bit slower than my two-wheelers but the Missus likes that since I don't drop her on the hills. She'll be riding her GT mountain bike that we've fitted with road tires. We'll both be towing the BOBs on grocery day.

There will be some exceptions to "riding everywhere". We have obligations to our local gun club that can't be fulfilled by bicycle. Hauling hundreds of pounds of steel plates under human power is entirely out of the question. As is the 240-mile round trip to The Property. The Missus isn't keen on riding to the base of the Manitou Incline for our weekly summiting, so that's probably an exception as well. But everything else is fair game: work, groceries, dentist and Sportsman's Warehouse.

I'll try to keep the posts coming on our progress and failures. At least once a week. Check back early and often!

TCM
Posted by TheCabinetMan at 18:38 3 comments:

if you are shopping for a new Supreme Court justice,

Not that Napolitano, but this one.

He's already a judge, if that's important to you. Not particularly important to me, because I believe that already being a judge would disincline one from making waves among other judges. Sorry, that's what the Supreme Court is supposed to do, in a way: point out other judges' errors, even the errors of prior Supreme Court justices. Slaughter Slaughterhouse, anyone?

That's probably why Andrew here so excites as an already-Judge. He's willing to call bullsh on other judges, rather than go along and allow their errors to perpetuate.
Posted by Fûz at 21:31 No comments:

First, I always wanted one of these, more than I lusted for a SPAS 12, say.

The High Standard 10B, a bullpup shotgun. I'm borrowing this photo from a Gunbroker auction, sorry if that offends.

If I were a lunatic independently-wealthy tinkering gunsmith, I'd apply the 10B treatment to a newer semi-auto, and extend that tubular magazine right out to the muzzle. Then I'd package the treatment as a kit for the hobbyist to mount on his own. I don't know enough about modern selfloading shotguns to pick the right one. Bleg?

Meanwhile, on the AR front:

With everybody except me offering a gas-piston AR clone design, the criticisms of the gas piston versus direct gas impingement are emerging, and the most cogent I've heard is this: the direct impingement system applies force exactly along the axis of the bore, breechbolt, and bolt carrier. All are in balance.

A piston offsets that force above the bore axis, causing the bolt carrier to tilt and shave away the soft aluminum of the AR's receiver pieces. A full-auto pistonized AR will grind itself to swarf in one firefight. AKs, in comparison, have rails that guide the bolt carrier and bolt in the needed direction; the offset force harms nothing.

If I were a lunatic independently-wealthy tinkering gunsmith, I'd solve that problem by integrating a steel supporting rail in the roof of the upper receiver. It would take the place of the cocking piece, and probably still function as one. The face of the bolt carrier that takes the force of the gas piston (no longer a "key") would be shaped to ride in that rail, and would not come down out of that rail unless the rail itself were extracted from the upper. The rail would have ample room for lubrication and for the accumulation of chum for the happy soldier to clean away. The bolt carrier would then have little or no surface on it to bear against the inside of the upper receiver---the rail handles all of that. No damage to aluminum receiver.

Whether this configuration would continue to use the existing buffer spring, buffer and buffer tube assembly is still undecided. Maybe the bolt carrier can be carved up to make room for recoil springs that fit within the upper receiver, like on the para FAL?
Posted by Fûz at 20:55 No comments:

A Yank wearing a NASCAR T-shirt, jeans, and a ballcap should not be surprised to receive poor service in a restaurant that caters to Eurotrash.

You're gonna wait so long for your dessert that you'll have to go to the maitre d' to remind the establishment that you ordered it.