The wife and I currently use two 20th century bicycle headlights that use incandescent bulbs and lead-acid battery "cells". Categorizing these systems as marginal is something of an understatement. They're heavy, bulky, and not all that bright, even with recently-replaced battery packs. Unless it's absolutely pitch black and we're pedaling along at a lazy 10 MPH, they cannot be trusted to properly illuminate the roadway for us to clearly identify road hazards. At best, they'll alert a driver to our presence at night. Maybe. Bicycle lights have come a long way since I first invested in these systems almost 15 years ago. But they can still be expensive.

Then I found an alternative.

What we're gonna' talk about today is the Fenix LD20 R4 flashlight. (This is the newer LD20, that has a max 205 lumens...) I first caught wind of this little guy by way of the kind folks over at EcoVelo. There'd been a couple posts over there about using flashlights for bicycle lights and I really liked the idea. What appealed to me about the LD20 was (1) it's price, given that it can fill two roles, (2) the fact that it can take AA batteries, and (3) that it uses a constant-current LED drive circuit. 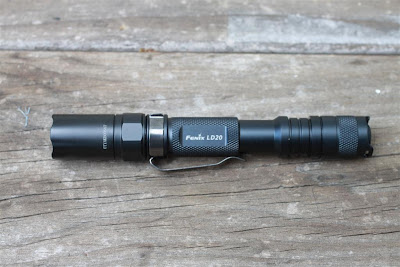 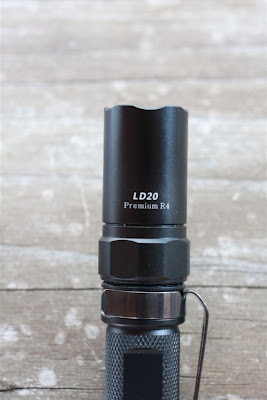 Most of the really bright flashlights (Surefire and Streamlight, for example) run off of CR123A batteries. These flashlights are great and I own several of them. The Missus gifted me a Surefire LED model that's bright enough to weld with! But I want something that uses rechargeable batteries, specifically rechargeable AAs. The problem with using the AA rechargeables is that their charged voltage is only ~1.2 volts. This voltage is low enough that most of my electronics gear fusses that the power is running low when I just installed freshly charged batteries. This is where the LD20's constant-current circuit comes in handy. Within reason, it doesn't care what the battery voltage is, as long as the batteries have the capacity to run the circuitry. Which the AA rechargeables do!

I won't go into a lot of detail about the LD20 'cuz you can get all that info for yourself just by following the linky. But the "added value" of the time you've spent reading this post is how the LD20 behaves while using different battery types. The Fenix web-site gives out the basics on time-vs-brightness, but what they don't tell you is under what conditions the tests were conducted. Well folks, I think I can answer a few questions about that since I was curious enough to conduct my own tests.

I borrowed a PIC microcontroller board and a photocell from work. I rewrote a mess of C code to turn the board into a data logger, rigged a cardboard box to act as the test rack, and proceeded to test the LD20 with five different types of batteries: Energizer Ultimate Lithium, Energizer Rechargeable (older), Energizer Rechargeable (newer), Energizer Alkaline, and Sony Eneloop rechargeable. The older Energizer rechargeables are probably four years old, though their charge/discharge count is pretty low. The newer ones are spankin' new, not even two weeks old. I used the 50 lumen setting for all the tests, which Fenix says provides 13 hours of runtime. (And the 50-lumen setting provides quite a bit more light than our current bicycle light systems.) Testing was done inside, so, say............, 75F. 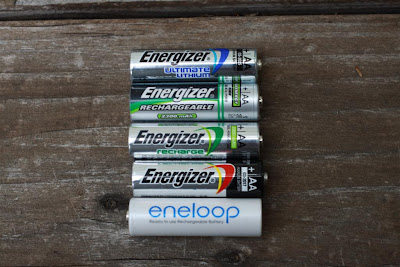 The following graph shows relative brightness over time. I couldn't tell you what the exact brightness is in lumens, it's just the reading off of the A/D converter attached to the photocell. Just assume it's the advertised 50 lumens. This graph makes it obvious that the constant-current circuit is doing its thing: when the batteries are dead, they're dead!!

As one would expect, the Ultimate Lithiums produce significantly better results than the other batteries. However, they're not rechargeable and they're wicked expensive at over $2 each!! They would be a good choice, however, for emergency operations where long run-times (and shelf-lives) are important -- and cost is not. (Lithiums will also perform better at temperature extremes than the other batteries will...) The other four batteries are quite comparable in their performances. The good news is that the rechargeables -- even with their lower full-charge voltage -- have capacities nearly equal to that of the alkalines.

To summarize the run-times:

It looks like we have a winner! Of course it remains to be seen how the rechargeables will work in colder weather, which is really the only time we need to use lights on the bicycles. But even if they give us a full week's commuting between charges (~6 hours, worse case), then they'll work great. So check back in about 6 months and we'll update on how this arrangement works. Until then .............. ciao!!

TCM
Posted by TheCabinetMan at 16:52 No comments: