Do you own the data created incident to being eyeballed?

What if two vehicles are hustling along a rural road, doing low-80s in a 75-limit zone, and a Highway Patrol vehicle comes from the opposite direction, suddenly pulls over, reverses direction, and catches up?

Mama-san, passenger with me in the rear vehicle, asks "Why didn't he just pull the guy over instead of waiting so long?"

I, driver of the rear vehicle, replied "He ran the plates."

"Wouldn't he do that after pulling him over?"

"No, he wants to make sure he's not pulling over some psycho who'll try to shoot him. He wants to know whether this will be a one-unit stop, or a two- or three-unit. Bench warrant, multiple traffic violations, expired registration, Al Qaeda, you name it. Run the plates first, know what you're getting into."

Then the wheels were turning. He surely ran our plates too. Hmmmm, the patrolman was probably thinking, serviceman and his wife and kiddies. Nothing interesting here . . . The guy in the front tripped the radar. What about him?

Which makes me wonder: how many times have my plates been run, either by obvious marked patrol vehicles or air units, or by unmarkeds just weaving through busy traffic? What about when optical-character recognition technology is mated with radar camera units and fast, fast realtime connection to the databases, allowing hundreds of plates to be "run" per minute? The potential there for loss of privacy would be staggering. The anonymity of the herd would be gone if it isn't already. The consequences of minor errors, either in the tag records themselves or in the data pipeline between the camera and the DMV, would be enormous.

Johnny Law will assert that he has the power to use government-owned information and commerically-available technology to enhance the apprehension of lawbreakers. How can one object, unless one is caught redhanded and wriggling to escape? The syllogism: the innocent have nothing to fear, therefore the fearful are not innocent.

So how should the civil libertarian respond to this development?

I submit: assert that publicly collected information be owned by those who collect it, and the subjects of collection. If you run my plates (public information, my property interest in my vehicle, my payment of taxes to use that vehicle on public roads, the presence of my vehicle on public roads) with commonly available technology (a camera in the patrol vehicle or mounted to view traffic on the public road, plus OCR to translate the plate into registration information) the resulting data belongs to both the government, who collected it, and me, whom it is about.

The cops know when they collect it. For it to be of use to them for the purposes of law enforcement, they must collect date/time, location, observing officer, and so on---to be evidence it must meet evidentiary standards.

But I may not know that it was collected at all, let alone know the details incident to its collection. If the information's mine, even in part, I have a right to know that it has been collected, where, when, and by whom. If there's an error or fraud I have the right to challenge that piece of information that may be, or is asserted to be, about me.

So do I have a right to know every time that my plates have been checked against databases of vehicle registration, operator licensing, outstanding warrants, and so forth? Some would be surprised to find how often their plates are run, so to speak, though I wouldn't be.

Will the shiny sexiness of technology overwhelm such error, to the extent that a bad OCR on my plate or a bad facial match, be more credible than my wife's testimony that I was five states and two time zones away from the crime?

Here comes the Al-Qaeda Exception: Hypothetically, an Islamofascist mole operating in the United States will be driving about just like I do, occasionally breaking a speed limit just as I do. He can expect to have his plates run about as often. His plates, his operator license, and other governmental records incident to operating a motor vehicle, would be subject to the same level of scrutiny as mine are. But if he's a jihadi baddass, he's looking tactfully to see whether his profile is low enough. Is he being followed or observed more than the average guy?

Would his right to know how often his plates are run, tip the government's hand that he's being watched?

Which way would you rather have it, gentle reader?

Please answer in the comments. No similarity between this post and the NSA intercept story is coincidental. How you answer probably describes your opinion of the intercept orders.
Posted by Fûz at 22:13 No comments:

First Thanksgiving with a convection oven

This was our first Thanksgiving with a convection oven. After frantic internet searches of how to roast a Thanksgiving turkey in one, I concluded that it would take maybe a little less time than a conventional oven would, that we'd positively adore the result, and that we'd depend on trial and error because of our altitude above mean sea level in the beautiful flyover country of Cheyenne.

With a meat thermometer, we'd still be disaster-proofing ourselves. Okayfine. A thirteen-pound critter stuffed, rubbed with paprika-laced olive oil and scattered with fresh parsley. Before: 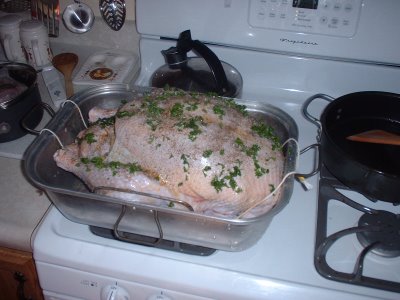 Four hours and forty-five minutes later at 375, with foil over the breast and legs, and the meat thermometer in the stuffing showing 180: 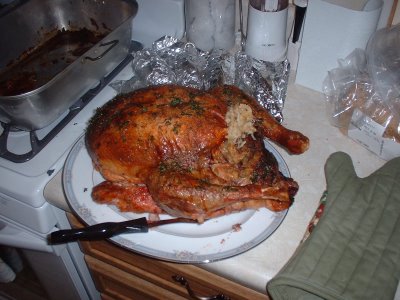 stuff at the other place

Post up at the Senate campaign blog.
Posted by Fûz at 20:04 No comments: