Free WiFi in the hotel room in Cheyenne!

Which reminds me: I have been reading the lessons learned reports from OIF, and one of the concerns is that the increased use of UAVs is congesting all of the satellites, to the point that DoD cannot deploy many more UAVs without hitting the capacity limit. Combine this with the desire to expand the use of Blue Force Tracker and Iridium satellite phones, and we'll be at or past the limit of available secure bandwidth in that theater.

The demand for bandwidth right down to the individual rifleman, loggie, firedog, or dirtboy is growing, so the congestion will only get worse.

We're going to have to move more of our wireless comms off the satellites, but to what? Well, how about developing a concentrator on a UAV, so it can be piloted in an orbit tastefully stood-off from a headquarters area, and let it route the calls either back to the ground or up to the bird? An unmanned airborne cell tower. Embed the security into the clients---the phones, pagers, PDAs---so the UAV is not a gigantic classified COMSEC item that must be recovered if it crashes or is shot down.
Posted by Fûz at 18:34 No comments:

After follow-up interviews with Ms Seiler, Madison Police have released an updated sketch of her alleged abductor:

Anyone who has seen a person answering this description is urged to contact the Madison Police Department.


. . . those who do not speak against, are in danger of being assumed to agree with the perpetrators of the next jihadist atrocity.

If she were ten pounds heavier, I'd be dead 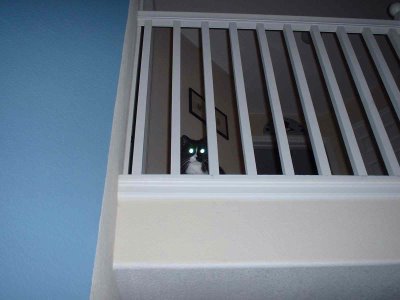 She's our oldest cat, we took her and her littermate The First Otis in when we closed on our first house, in Bellefonte, Pennsylvania, in 1993. Our litter training skills were such that Recluse had to be chased and caught from time to time, to be moved to the litter box. On one such occasion, she snagged one of her front claws in the carpet, and as she fled, the claw held and she flipped herself over.

She has not forgiven me. She never will. She spends her entire day under our bed, with occasional forays to water, litter, or food. Whenever I enter the room, she bolts.

If she had just a few more pounds on her, she'd tear my throat out in my sleep.
Posted by Fûz at 23:04

Hey, I work for a living!

Posting has been light recently. We posted a sudden upsurge last Thursday and Friday because, well, Fûz took some leave as his orders were about to end, and he was waiting for indication of whether he'd be kept on orders. Thursday and Friday were to be devoted to a leaking automatic transmission in the Fûzboat, learning how to operate a sewing machine, and getting in line with the Milfwagens to drop off and pick up Daughter Units at school.

Fûz's orders were renewed for another 90 days, so Thursday was spent downloading and running the AF's replacement for The Execrable FormFlow so he could submit new leave paperwork. Friday was spent getting his orders amended, and having a new DoD ID card prepared. Without further gory detail, Thu and Fri were shot in the temple.

Upside, Fûz continues to draw salary for another three months. And we made it to the Knights' fish fry.

Update: On 1 April, we received the auth for 360 days. And the transmission still leaks after installing a new pan gasket.

Fûz can blog from work, in a limited fashion, in between feeding Toad and chasing Boy and stretching Middlechild and reading to Firstborn, and letting Barbaloot nap. But he gets to go to Undisclosed Combat Readiness Training Center and work with Cadre again for a few weeks.

Walter hosts the Rocky Mountain Roundup. Please go there.
Posted by Fûz at 22:31 No comments:

Allah, as Muslims view him, is omnipotent, above logic and reason, unrestrained by natural law. He can decree at any moment that evil is good and two and two make five. People are subject to his arbitrary and tyrannical rule and can do little more than plead for mercy. Nations who worship such a God, it turns out, are themselves governable only by a tyrannical ruler.

Tom Bethell, American Spectator, March 2004, "The Living Hell of Bill Moyers" (sorry, no URL directly to issue or the article).
Posted by Fûz at 14:02 No comments: