File this under Noodling.

One repeated criticism of the AR15 design is its direct gas impingement action. Propellant gas is tapped from the barrel and led through a tube backwards into the receiver of the piece, and into the bolt carrier itself. The gas pressure works against a piston which is a rearward-facing surface of the bolt. The pressure builds between that face of the bolt and the internal surfaces of the bolt carrier ('directly impinging' upon the bolt), forcing them apart. A cam translates that force into rotation of the bolt, so its lugs disengage with their mating surfaces, the bolt unlocks, and the bolt carrier can retract, carrying the bolt with it.

The propellant gas passing through the bolt carrier leaves a mess behind, as a carbon buildup that has to be cleaned out, or it will build up to the point that the piece malfunctions.

The upside? Fewer parts and less weight compared to a firearm that contains this gas in a cylinder up front of the receiver, and uses the pressure to move an operating rod. In an indirect-impingement firearm, the operating rod moves the bolt carrier without depositing burnt-propellant crud in the receiver.

So the noodling goal is to improvise an operating rod that weighs the least possible and fits within the AR15 footprint--or a footprint expanded to what the market will accept.

Picatinny-rail forearms are the rage. A free-floating tube takes the place of the original AR15-type forearm nowadays, and Weaver-type rails are fastened to or forged integrally with the tube at 12, 3, 6 and 9-o'clock positions. Plenty of room exists within to contain a few grams of extra hardware.

The extra hardware consists of a spigot and an operating rod, fitting into a replacement gas block. The photo shows the first two parts and omits the gas block. 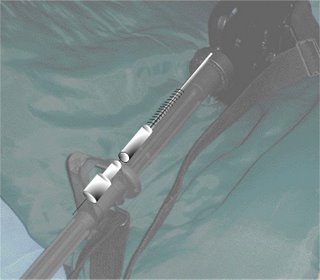 What the photo does not show is the yoke ("gas block"), the part that is fastened to the carbine barrel and is bored to take the spigot. The forward, thicker section of the spigot has keyways milled into it so it quarter-turns into the yoke to fasten there.

The yoke has a port bored in it so a hole in the barrel lets propellant gas out, through the port, into a matching port in the spigot. The spigot then redirects the propellant gas rearward into the op rod.

As the gas passes through the port, into the spigot, it enters the op rod's cylinder, filling it and pushing it rearwards.

When the op rod retreats far enough, the rearmost face of the spigot is exposed, and the gas that filled the op rod cylinder can escape. No gas is introduced into the upper receiver along this route. The bolt carrier, having more mass than the op rod, keeps going rearward. The op rod runs out of gas, so to speak, and its return spring pushes it home again, back over the rear tail of the spigot.

The spigot guides the op rod's cylinder back home; only a millimeter or two of the op rod's travel will not be guided by the spigot, so there will be no need of a tube or rail to guide the op rod.

Reassembly is reverse of disassembly.

All of it should fit within the confines of the modern Picatinny-railed handguard. Some propellant junk will accumulate within that handguard but that won't interfere with operation of the carbine. A toothbrush will get it out. Some tuning of internal surfaces of the handguard may be necessary to guide the op rod on its travel, and to buffer the op rod's return spring.

The challenges? First, to make the parts very light. If the walls of the op rod's cylinder are thin enough, they'll heat up in protracted fire so propellant gunk will burn off rather than build up. Too thin, though, and the walls will rupture. The yoke and spigot have to be kept light too. All of it will have to be steel rather than aluminum alloy, to resist the burning propellant gases.

Another problem would be the bowing of the tail of the op rod under firing pressure. If it flexes or bows too much it will bind against the hole in the upper receiver instead of shoving the bolt carrier rearward. Maybe the tail could be peened with flats so it will bow at more nodes but with less amplitude. This will be less of a problem with shorter-barreled carbines, such as the M4, because the tail will be shorter than that of the A3 rifle, with same diameter, thus stiffer.
Posted by Fûz at 22:05 No comments: Links to this post