I reupped some time ago, neglected to post anything about it, until Barbaloot discovered the photo, taken before the memorial wall at our Wing.

Posted by Fûz at 11:58 No comments: Links to this post

Bill Bennett mentioned yesterday that he would try his hand at a Twenty-First Century manifesto for the Democrat party. I think Hugh Hewitt would try the same. Doubtless other bloggers and commentators have suggested it too.

"The Democrats could be a resurgent political force in the United States if only they would," [fill in the blank with your favorite killer policy prescription].

If only the Donkeys would embrace genuine tax reform and win back the small businessmen and the widows'n'orphans and the IRS victims. If only they'd pick up and run with Second Amendment rights, and recover their union rank-and-file base. If only they'd drop the pretense at Drug Warrior and stop incarcerating whole generations of black males. If only they'd give up their current infatuation with coastal elites and academics, and return to their roots among blue-collars and farmers.

If only. If only.

Every WUTT! reader has his favorite, the one sure thing that would turn the Donks' fortunes around. And I have mine.

How better to reach out to Maw and Paw Heartland than to say "We Donkeys are really really upset, deeply livid in fact, that Big Corporations are suborning local governments into kicking ordinary people out of their houses to make way for condos, shopping malls, parking garages, and so forth. It's nothing but Corporate Welfare, and we Donks don't stand for it."

SayUncle is all over this, and so is the Institute for Justice.

None of the if-only policy proposals I've heard so far is utterly impossible for the Democrats, even an eminent-domain reform platform that runs afoul of the enviros, or a pro-gun platform that would hospitalize Chuck Schumer. Some Party leaders would be alienated, of course, but they'd come around, as they just might in '06 when Tom Daschle makes the rounds like a macabre breathing Marley's ghost and gets them thinking right about the fundamental problem, the only problem really, that of Staying In Office.

My greatest concern from all of this is that with such an opposition, the GOP can make a serious mistake and fail to realize it until it's too late. Like in the Colorado legislature this year, for example. From the point of view of individual rights and the free market, the GOP may be second-rate firemen, but the Donks are first-rate arsonists. 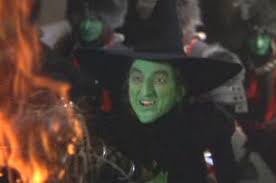 How about a little fire, Scarecrow?
Posted by Fûz at 21:02 No comments: Links to this post

Bifocal spectacles have the lower portion of the lenses cut to a higher magnification, so someone with weaker muscles in the eye can focus more easily on fine print that is close to the eyes.

All well and good, I suppose, as long as the reader holds his head upright and trains himself to look downward. Then a good portion of his visual field is magnified, even though only the reading material that needs magnification is only a small sub-portion of that portion of the visual field. For other visual tasks at greater distances, the added magnification is useless and even gets in the way.

Bifocals could be made less awkward by limiting them to the field of view that a reader is likely to need. To wit, if the magnification is needed only for materials that are closer, then put the magnification in the area of the lenses that both eyes will be looking through when they are focused on closer objects. Eyes converge---point inward---on nearer material. So move the magnification areas closer to the nose, a little higher, and a lot smaller. They'll be where the eyes need them when reading, and out of the way for distant vision or for tracking moving objects.

If I get time I'll sketch what I mean.
Posted by Fûz at 19:39 No comments: Links to this post

Dr Freud, your slip is showing

A colleague snorted after a news story about another wedding for the British Royals, "I wonder what color of dress she'll wear."

I blurted out off-white colors that indicate less than the expected premarital purity, "Cream? Bone?"
Posted by Fûz at 19:37 No comments: Links to this post

This is virtually a concession

I see this as a major concession of legitimacy by the antigun crowd, tantamount to "You might have a point there." It's that niggling word "arguable" that Eugene used. English 1 students will recognize that adjective. Up to this point, antigunners would not allow that term to be used, meaning that a literal understanding of the Second Amendment would not be allowed on the table.

From here it's a matter of continued pressure. Be of good cheer and unrelenting energy.
Posted by Fûz at 19:33 No comments: Links to this post

The New Jersey Appellate Division has just held ... that a federal statute - 47 U.S.C. sec. 230 - makes Web site operators immune from defamation liability based on items posted by users, even when the operator keeps some messages and deletes others, changes some messages, sets ground rules for the discussion, and so on. This would also mean that bloggers are immune from liability based on comments posted by others on their blogs.

This doesn't mean anything for me directly, but it should spare other blogs of any trouble from comments I might post there. I wouldn't want that on my conscience.
Posted by Fûz at 19:33 No comments: Links to this post

It's gonna be a good season, Mama. Look at the whiskers on them cats

At my age, and in my current occupation, one quickly understands that one's wisdom is grounded in knowing what one does not know.

By that standard, today is a good day, because not only do I know what I don't know, but I seem to not know less that I thought I didn't.

Should I let anyone else know this?
Posted by Fûz at 17:58 No comments: Links to this post